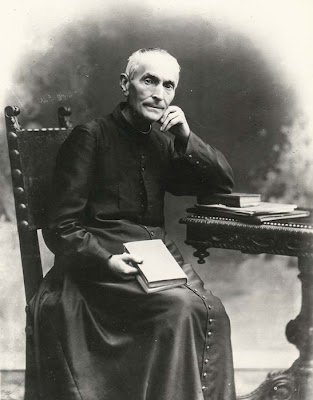 The following comes from the Salesian News Service in Rome:

In a short letter addressed to all Salesians, the Rector Major officially announces the celebration of the centennial of the death of the first successor of Don Bosco, Blessed Michael Rua. The commemorative year will begin on January 31, 2010, and conclude on the same day in 2011, the day on which “Father Rua took the tiller, to continue the journey on which the Founder had embarked,” following Don Bosco’s death in 1888.

As Father Chavez points out, for the Salesians 2010 will be “a continuation of this present jubilee year; it will help us to bring to fuller maturity our consecrated Salesian vocation.”

The Rector Major indicates for the Salesians three “focal points” to be borne in mind for spiritual and pastoral planning for the coming year, at personal, community, and province level. He promises to develop them further in a future letter.

Father Rua, “the faithful disciple of Jesus in the footsteps of Don Bosco,” is for each Salesian the model for “preserving fidelity to the vocation of consecration,” a fidelity which needs nourishing by drawing “deeply from the wells of the life of the disciple and the apostle, from the fountains of fidelity to our vocation: Sacred Scripture, through lectio divina and the Eucharist.”

The second “point” indicated by Father Chavez is inspired by the commitment Father Rua assumed: “In Mirabello I shall try to be Don Bosco.” The Salesian Constitutions, whose importance and spirit need to be rediscovered, are the point of reference in order to be Don Bosco today, the role being asked of every Salesian.

The last point starts from the passion which the first successor of Don Bosco had for Da mihi animas. “The mission called him to respond to the needs of the young and to find pastoral ways suited to reaching them with the proclamation of the gospel,” the Rector Major says, inviting Salesians to take up the commitment to the evangelization of the young as the last general chapter requested and according to the strenna for 2010.

The celebration of the first centennial of the death of Father Rua—the Rector Major points out in his short letter—ought to help Salesians to be “conscious of the historical situation, that from the death of Don Bosco until our own days, the Congregation has had a great and significant development, taking steps forward, having second thoughts, making fresh starts, reflecting deeply. The identity of the Congregation can be understood better, in fact, through its history, knowing the forms and expressions it has assumed at different times and in different places.”
Posted by Padre Steve at 7:31 PM