A Miracle for Blessed Fr. Seelos? 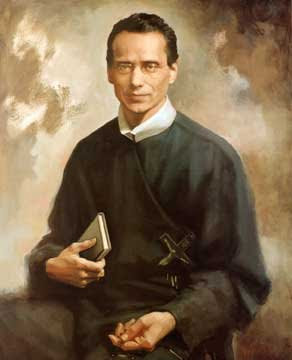 Blessed Francis Xavier Seelos is in need of one more miracle for his canonization. Is this a miracle that will move him toward canonization? The following comes from the Baltimore Sun:

The treatment for terminal cancer that Annapolis resident Mary Ellen Heibel took at Johns Hopkins Hospital in 2004 and early 2005 worked beyond anyone's wildest hopes, wiping out malignant tumors in her lungs, liver, stomach and chest. Her doctor did not expect it, nor could he explain it.

Surely the outcome was remarkable, but was it - in the sense applied by the Roman Catholic Church in such cases - a miracle?

In a few weeks, a committee appointed by the Archdiocese of Baltimore will begin exploring that question, examining 11 witnesses, including Heibel, pressing her doctors, nurses and friends in an attempt to understand what happened. The findings gathered at the archdiocese's downtown offices will be shipped to Rome, and ultimately will bear on a campaign to have Francis X. Seelos, the 19th-century Maryland priest to whom Heibel had turned in prayer for help, canonized as a saint.

For only the fifth time in its 200-year history, the archdiocese has launched a test of faith and science to help the Vatican determine whether one of its own was not only exemplary in virtue during life but now has the power in death to intercede with God. In the end, it will be up to the pope to rule on whether Seelos is to join the men and women held up by the church through the centuries as models of holiness.

"Did what happened come about by the intercession of Blessed Seelos? That's what we have to discover," said the Rev. Gilbert J. Seitz, the judicial vicar who heads the committee, emphasizing that its job is not to judge the case but to gather information in a process akin to taking a deposition.

The Rev. William Graham, a canon lawyer and member of the committee, says the purpose of the examination is to determine what took place and whether it can be attributed to natural causes.

Heibel and her husband, John, parishioners at St. Mary's Roman Catholic Church in Annapolis, await word from the archdiocese on when they should appear before the committee to tell their story and answer questions.

In the meantime, they continue their weekly routine at St. Mary's of early morning prayers seeking the help of Seelos, the Redemptorist priest who in several ways remains present at the church where he served two brief stints in the mid-1800s. The German native beams from stained glass in the nave, watches from a photograph on a wall near the church office, sits in a statue on a bench in the garden. A chip of his breastbone the shape and size of a pinkie fingernail is preserved in a reliquary kept in the rectory.

For years Seelos - who also served as a pastor in Baltimore and Cumberland - has been a physical presence for Heibel, 71, a slim mother of four, grandmother of 11. In a brass necklace reliquary about the size of a silver dollar, the retired antiques appraiser wears a fragment of his bone no longer than the "L" in relic.

She has carried Seelos with her this way since early 2003, when she was diagnosed with and underwent surgery for esophageal cancer at Walter Reed Army Medical Center in Washington. About a year later, doctors there found that the surgery had missed a cancerous lymph node. So began a seven-week, five-day-a-week regimen of radiation and chemotherapy.

She prayed with Seelos. She asked fellow parishioners to do the same.

For the rest of the story please click here.
Posted by Padre Steve at 4:11 PM