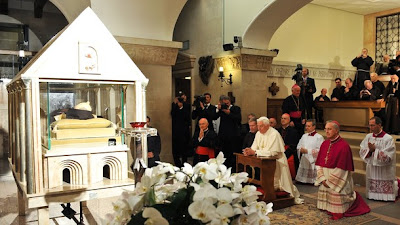 The Holy Father visited the town of Padre Pio today and had a word on the Year for Priests. The following comes from the CNA:

During his trip today to the town where St. Padre Pio lived and ministered, Pope Benedict XVI celebrated Mass, visited a house dedicated to caring for the suffering and the tomb of the famous Italian saint. At the tomb of Padre Pio, the Pope recalled the devotion that the Capuchin saint, canonized in 2002, had to the Blessed Virgin Mary.

"All his life,“ the Pope said, "his apostolate took place under the maternal gaze of the Blessed Virgin and by the power of her intercession. Even the House for the Relief of Suffering he considered to be the work of Mary, 'Health of the sick.'"

"To the intercession of Our Lady and St. Pio of Pietrelcina, " he continued, "I would like to entrust the Special Year for Priests, which I opened last Friday on the Solemnity of the Sacred Heart of Jesus. May it be a privileged opportunity to highlight the value of the mission and holiness of priests, to serve the Church and humanity in the third millennium!"

"There are many people who seek refuge in other countries fleeing from situations of war, persecution and natural disasters, and hosting them poses many difficulties, but is nevertheless necessary,” Benedict XVI stated.

“God grant that, with the commitment of everyone, we do as much as possible to remove the causes of such a sad phenomenon."
Posted by Padre Steve at 8:54 PM