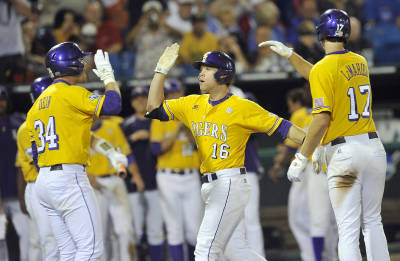 The final was 14-5 for LSU over Arkansas! God bless you boys! The following comes from the LSU Sports Net:

LSU (54-16) won its 13th-straight game and will face either Texas or Arizona State on Monday at 6 p.m. CT. The championship final is a best-of-three series broadcast live on ESPN.

The five-time national champions have never played in the championship series, as the format was adopted in 2003.

Ranaudo (11-3) dominated the Razorbacks, needing only 78 pitches including only 19 balls to get through six innings. He struckout five and was nearly untouchable.

Offensively, LSU opened a 4-0 lead in the third inning and never looked back. The Tigers added solo homers by Blake Dean, Jared Mitchell and Ryan Schimpf, and a two-run shot by pinch hitter Tyler Hanover in the ninth.
Posted by Padre Steve at 7:52 PM