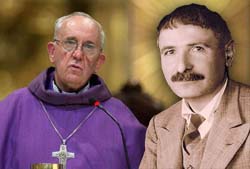 Fr Juan Edmundo Vecchi, 7th successor of Don Bosco, in his Letter, “The Beatification of Brother Artemides Zatti: a sensational precedent” employed a testimonial by Fr Jorge Mario Bergoglio, today Pope Francis, who had occasion to know the new Blessed. We reprint a section from Fr Vecchi's Letter (ACG 376).

It will be worth our while to listen to one who has experienced the efficacious intercession of Artemide Zatti precisely with reference to the vocation of the consecrated layman, and kindly made it a point to tell us of his experience. He is His Eminence Cardinal Giorgio Mario Bergoglio, now Cardinal Archbishop of Buenos Aires, who was Provincial of the Jesuits at the time of the following testimony.
I quote from the text of a letter written to Fr Cayetano Bruno SDB, dated: Buenos Aires, 18 May 1986.

“Dear Fr Bruno: Pax Christi! In your letter of 24 February you asked me to write something about my experience with Bro. Zatti (who became a great friend of mine) concerning the vocations of Brother confreres. […]

We had a great dearth of lay confreres.  I take as an example the year 1976, when I first got to know of the life of Bro. Zatti. In that year our youngest lay confrere was aged 35; he was an infirmarian and four years later died of a tumour on the brain. The next youngest was aged 46, and the next after that was 50.  The others were all of venerable age (though many still continued to work as best they could despite their 80 years). This demographic picture of the lay confreres in our Argentine Province led many to think that the situation was irreversible and that there would be no more vocations. Some, in fact, wondered whether the lay confrere had any longer any relevance among the Jesuits, because – looking at the facts – it seemed that he would soon be extinct. Moreover efforts were being made in various places to outline a ‘new image’ of the lay confrere, to see whether by this means a stronger appeal could be made to young men to follow this ideal.

In 1976, and about September as far as I recall, during a canonical visitation of the Jesuit mission in northern Argentina, I stayed for a few days at the residence of the Archbishop of Salta. There, as we were chatting together after a meal, Mgr. Pérez told me about the life of Bro. Zatti; he also gave me a biography to read. His example, that of a complete lay religious, made a deep impression on me.  At that moment I felt that I must ask God, through the intercession of that great Brother, to send us some lay vocations for the Jesuits.  I made novenas and got our novices to do the same. […]

At Salta on various occasions I had felt inspired to recommend to Our Lord and Our Lady of Miracles an increase in vocations in the Province (this in general, and not specifically in brother vocations, as I did with Bro. Zatti). Furthermore I made a promise that the novices would make a pilgrimage on the feast of the Lord of Miracles if we reached the number of 35 novices (a number we reached in September 1979).

I come back to the request for lay vocations. In July 1977 the first young brother entered (he was aged 32, as a matter of fact). On 29 October of the same year came the second (he was aged 33)”.

And the letter goes on, detailing year by year a list of 16 other lay-brothers who entered between 1978 and 1986. The letter then continues:

“From the time we began to pray to Bro. Zatti 18 young lay-brothers entered and persevered, with another five who left during the novitiate or juniorate: a total of 23 vocations.

The novices, students and lay-brothers have several times made the Novena in honour of Bro. Zatti, asking for lay vocations.  I myself have done the same. I am convinced of his  prayers and intercession for this intention, because the numbers involved make it a rare case in our Society. As a mark of our gratitude, in the 2nd and 3rd edition of our Booklet of Devotions to the Sacred Heart, we have included a Novena asking for the canonization of Bro. Zatti.

Another interesting point is the quality of those who entered and are persevering. They are young men who want to be the kind of lay-brother that St Ignatius himself wanted, without them having to be spoon-fed.  For us the vocation of the lay-brother is very important.  Fr Arrupe used to say that without them the Society would not be what it is meant to be. They have a special charisma which is nourished by prayer and work. And they are a benefit for the whole body of the Society.  […] They are hard workers, pious, happy and level-headed, of manly bearing and well aware of the vocation to which they have been called. They feel a special responsibility to pray for the young Jesuit students who are preparing for the priesthood. They display no inferiority complex for the fact that they are not priests, nor do they have any idea of applying to become deacons, etc.; they know what their vocation is and that is how they want it to be. This is helpful, and a very good thing.

These have been the general lines of my relationship with Bro. Zatti on the question of Lay-brothers for the Society.  I repeat that I am convinced of his intercession, because we have prayed so much through him as our advocate.
And that is all for the moment.

Affectionately in the Lord and his Most Holy Mother,
Jorge Mario Bergoglio, S.J.”

This is a wonderful stimulus for us too to ask for the intercession of Artemide Zatti for an increase in good and holy vocations of Salesian Brothers.
Posted by Padre Steve at 9:13 AM