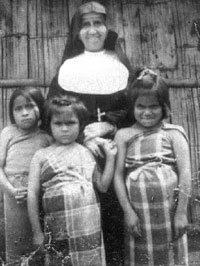 
The Daughters of Mary Help of Christians and with them the entire Salesian Family are in happy expectation for the Beatification of Sr Maria Troncatti. It will be possible to follow the event by direct streaming broadcast tomorrow at 10 a.m. Ecuador time. Cardinal Angelo Amato, sdb, Prefect of the Causes of the Congregation for the Causes of Saints, will be presiding

Macas is where it will take place and many Salesian Sisters and Salesians are gathering there from Ecuador and elsewhere in Latin America, along with young people and Salesian Family members.

Mother Yvonne Reungoat arrived in Ecuador on 20 November with Sr Piera Cavaglià, Secretary General. Representing the Rector Major, tied up in Rome with the USG assembly, is his Vicar, Fr Adrian Bregolin, and the Postulator for Causes of Saints in the Salesian Family, Fr Pierluigi Cameroni. The President of Ecuador has made a military aircraft available for guests of honour to come to Macas.

There are various events in Ecuador marking preparations for Sr Troncatti's Beatification.
Sr. Maria Troncatti – born at Corteno Golgi (Brescia, Italy) on 16 February 1883 died in a plane crash at Sucùa (Ecuador) on 25 August 1969 – she is an example of a Religious and missionary vocation, filled with Marian devotion and dedication to the apostolic mission she had received. Hers was a life given to evangelisation and social and human development of the Shuar people in the Amazonian jungles of Ecuador. What stands out is her strong love for and fidelity to the Church expressed also in her care for God's ministers: she was always ready to lend them a hand in the difficulties of the mission.

Salesian missionary Fr John Vigna, who had occasion to get to know Sr Troncatti, says of her: “She was the very embodiment of simplicity and Gospel shrewdness. With what exquisite motherliness she won over hearts! For every problem she found a solution that was, in the light of the facts, always the best one. She never overlooked the fact that she was dealing with weak and sinful human beings. I have seen her deal with human nature of every kind, including the most miserable: she treated them with the kindness that was just natural and spontaneous for her. What surprised me was that she remained exquisitely the woman in everything and always. I would say that the more virginal she was the more she was the mother”.

There are various resources available for getting to know Sr Maria Troncatti better: sdb.org and cgfmanet.org.

The Salesian Sisters in Ecuador have a new section on their site dedicated to Sr Maria Troncatti. On this site, on Saturday morning 24 November at 10:00 (GMT-5) it will be possible to follow a direct broadcast of the Beatification at which Cardinal Angelo Amato, sdb, Prefect of the Congregation of Causes of Saints will preside.
Posted by Padre Steve at 8:00 AM