Remembering Our Lady of Beauraing 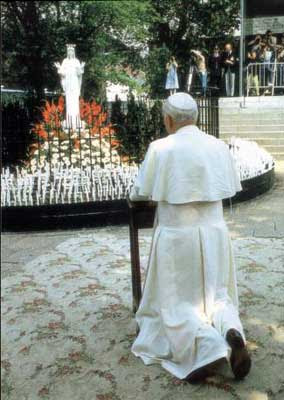 Today is the anniversary of the first visions of Our Lady at Beauraing, Belgium. The following comes from MedjugorjeUSA:

In 1917, Our Lady of Fatima told the 3 shepherd children that if men did not stop offending Her Son, the world would be punished by means of wars, famines, and persecutions of the church. By 1932, this prophecy was well underway. Communists were in power in Russia. Mussolini was leader of Italy. Hitler was rising in Germany. The world was in depression. Unemployment, bread lines, hunger and riots were wide spread.

In a French speaking part of Belgium, lay a village called Beauraing. Sixty miles southeast of Brussels, Beauraing was mostly a farming community of about 2000 people.

Once staunch Catholic, many Beauraing villagers were lead away from the Church. The Marxist Labor Party won many district elections. Many were now anti-Catholic.

On November 29, 1932, Fernande and Albert Voisin, age 15 and 11, respectively, went to meet their sister, Gilberte, age 13. Gilberte attended an Academy conducted by the Sisters of Christian Doctrine. Gilberte's sister Fernande and brother Albert would often walk their sister home from school at the end of the day. Accompanying them this day was the two Degeimbre girls, Andree, age 14 and Gilberte, age 9.

Waiting for Gilberte Voisin to come out of the convent, the other four children went to the convent garden to visit the Lourdes Grotto. Albert was the first to notice a beautiful luminous lady dressed in white, walking in the air with her feet inside a cloud. Looking to see what Albert was talking about the other children saw the lady as well.

The lady looked about 18. Her eyes deep blue with rays of light coming from her head. She wore a long white pleated gown with a belt. The dress reflected a sort of blue light. Her hands were held together as if in prayer. Later she would carry a Rosary on her right arm during all other visitations.

The lady continued to appear in the following days. On December 2, Albert was the first to speak asking her, "Are you the Immaculate Virgin?" The Lady smiled and nodded Her head, then saying, "Always be good." Disappearing, She returned 3 more times that very day.

On several occasions the Lady told the children that She desired them to be present on the Feast of the Immaculate Conception. On December 8th some 15000 people were present, as the word of the vision had spread. During this apparition, Dr. Maistriaux, Dr. Lurquin and other doctors were there to pinch, slap, prick and shine flashlights in the children eyes. There was no response from the children during the Lady's visit.

Dr. Lurquin took a lighted match to Gilberte Voisin's left hand; still there was no response. After the apparition Dr. Lurquin looked to see what damage the match had done. There was no sign of injury.

On December 17, the Lady asked for a chapel to be built.
On December 23, she stated that she desired people to come on pilgrimage.
On December 21, the beautiful luminous Lady clearly stated, "I am the Immaculate Virgin."
On December 29, the Blessed Virgin opened Her arms in Her usual gesture of farewell. This time Fernande saw a Heart of Gold, surrounded by glittering rays. In the coming days all the chosen children witnessed this event which happened in all the remaining apparitions. The Heart was without question, the Immaculate Heart of Mary.

Beginning with the Dec. 30th apparition, Our Lady began to repeat, "Pray, pray, very much. 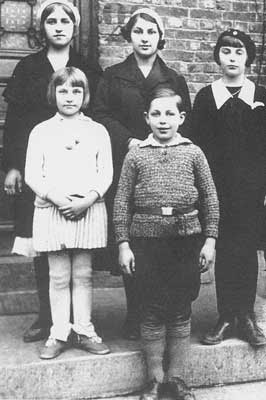 On Jan 3, 1933, after two decades of the rosary, again She appeared. She spoke to each child separately, given each a secret and ending by saying good-by.

Fernande was the last to receive word. At this time many spectators witnessed a loud noise like thunder, seeing a large ball of fire. Our Lady said to Fernande, "Do you love My Son?" 'Yes,' Fernande replied. "Do you love Me?" asked the Lady. 'Yes,' Fernande answered. "Then sacrifice yourself for me."

As Fernande was asking what sacrifices she should make, the Lady of light extended Her arms in gesture of farewell showing Her gold heart, then She disappeared saying good-by.

Though this was the last visitation, the children prayed the rosary in the Grotto every day. There were reports of a number of healing and many sinners were converted.

In 1935, a Commission was appointed to investigate the Events in Beauraing. On February 2, 1943, Bishop Andre Marie Charue authorized public devotion to Our Lady of Beauraing. Decrees of healing were to follow. On July 2, 1949, the Bishop released a document to Clergy in the Diocese declaring that the Queen of Heaven did appear to the children.

The statue of Our Lady of Beauraing was blessed on August 22, 1946, the Feast of the Immaculate Heart. The Chapel was consecrated August 21, 1954.

The secrets given to the children have never been revealed.

Very enlightening and informative. Beauraing is one of the Church approved apparitions that indeed is not very well known.
Thanks for the great post!
Glenn Dallaire
http://www.stgemmagalgani.com