Saint of the day: John Berchmans 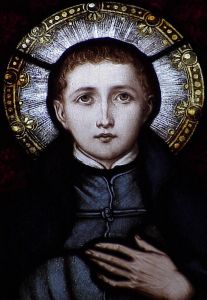 Today we remember another youthful saint as we remember John Berchmans.  The following comes from the Patron Saints Index:

Son of a shoemaker, and one of five children, three of whom entered religious life. Great devotion to his position as an altar boy. He spent much of his time caring for his mother, who was in poor health. Jesuit noviate in 1616, deciding to become a Jesuit after reading the life of Saint Aloysius Gonzaga. Student at the Jesuit College at Malines. Studied philosophy in Rome. John had a dream of helping and teaching multi-lingual migrants, and he studied all the chief languages of Europe. He wanted to work in China after ordination. He died of unknown causes following his participation in a public debate defending the faith, and while clutching his rosary, crucifix, and rules of his order; he did not live to be ordained.

John Berchmans was not noted for extraordinary feats of holiness or austerity, nor did he found orders or churches or work flashy miracles. He made kindness, courtesy, and constant fidelity an important part of his holiness. The path to holiness can lie in the ordinary rather than the extraordinary.
Posted by Padre Steve at 9:30 AM