St. Michael the Archangel and the Resurrection of the Dead 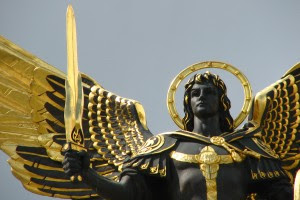 November 15, 2015First Reading: Daniel 12:1-3http://www.usccb.org/bible/readings/111515.cfm
History moves inexorably toward a climactic conclusion. Sometimes we don’t feel the momentum and every day feels like a repetition of the last. Yet other times, we feel like we are on the cusp of a new era as events unfold around us. The Bible does not present a cyclical view of the universe, as if everything just kept repeating. Instead, it offers us a linear view of history, with a real beginning, a definite trajectory, and a conclusive end. So much of the time we are stuck in the here-and-now, maybe only looking a few years ahead. Yet God invites us into his perspective regarding time, where the story that we are living in the midst of will finally be brought to a close. That end is not likely to be a nice, quiet affair. Rather, as we can see from human history, it will probably shake things up. The Bible frequently describes the end in terms of war, famine, pestilence, conflict, and division. In this Sunday’s first reading, we get a glimpse of the climactic close of the age and what will happen afterwards.

The passage from Daniel 12:1-3 presents “Michael, the great prince” (RSV). He will come as a great deliverer of God’s people. Now Michael himself is often celebrated in Christian art—the heroic, sword-wielding archangel, who makes for a great boys’ All Saints Day costume. Yet Michael is mentioned very few times in the Bible – here in Daniel (10:13, 21; 12:1), and then again in Jude 1:9 and Rev 12:7. Michael is one of the seven archangels. Wait! There are seven? Well, Catholic tradition normally only recognizes three: Michael, Gabriel, and Raphael—the only ones mentioned in the biblical text. Yet Tobit 12:15 calls Raphael “one of the seven holy angels,” a thought which is revisited in Revelation 8:2, 6, which also mentions seven angels. Non-biblical traditions have identified the names of the other four angels as Uriel, Sariel, Ramiel, and Raguel (though these are uncertain and disputed). Michael’s name in Hebrew means “Who is like God?” His very name is a provocation, a taunt to God’s enemies. The Church invokes Michael’s protection in the context of spiritual warfare. Both in Daniel 12 and Revelation 12, Michael is depicted as leading the angelic armies in battle, so he can help us in combat too.

Daniel 12 depicts a battle, but context makes it difficult for us to parse exactly which battle we’re talking about. The previous chapter spoke at length in cryptic terms about the Maccabean revolt, the persecution of Antiochus IV Epiphanes and his downfall. The very end of chapter 11 describes the fall of a certain king, who could be identified as Antiochus, but many identify this king as the anti-Christ. So Daniel 12 could either be referring to the battle at the end of time or to the battles of the Jewish revolt against Antiochus in the second century BC. However, if it does refer to the Maccabean revolt, that would not be all that surprising since angelic forces show up to aid the Jews in this time (see 2 Macc 3:25-26; 10:29; 11:6). Either way, God sends Michael to the aid of his people in the midst of combat. If this is the same battle mentioned in Revelation 12:7, then we can identify it with spiritual warfare.
Read the rest here.
Posted by Padre Steve at 10:06 AM