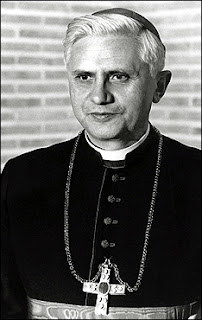 “The church will become small and will have to start afresh more or less from the beginning. She will no longer be able to inhabit many of the edifices she built in prosperity. As the number of her adherents diminishes . . . she will lose many of her social privileges. . . As a small society, [the Church] will make much bigger demands on the initiative of her individual members.” --Joseph Ratzinger (Pope Benedict XVI) in 1970
Posted by Padre Steve at 2:00 PM

It is an interesting quote. I read something recently from a US Catholic site whereby if you were serious about your Catholicism and attended one of the many protestantised/secularised Catholic Churches then it was time to move to a Church which was more orthodox so that that the community could build its self up.

The idea was that the white washed (Cromwellian) style churches would be the ones which would be closed because of the lukewarm Catholicism. These people would not fight for their Church (I have seen this locally). Whereas the more rigorous church would start to grow and develop a Christian community and would fight back.

I thought that this was a extreme when I first read it, but this is now happening in North Lincolnshire and I am beginning to think that the person who wrote it might be on to something. Especially in light of Cardinal Ratzinger's quote.