The Devotion to Jesus: The Divine Child! 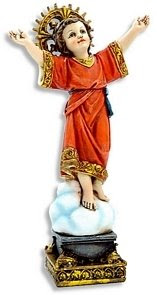 You may have heard about the devotion to Jesus, the Divine Child from EWTN and the Shrine of Mother Angelica's Nuns. It is a beautiful devotion that has Salesian roots and is commemorated on September 3 each year! The following comes from the Catholic Tradition website:

The devotion to the Divino Niño in Bogota Colombia began with Fr. John Rizzo, a Salesian priest from the region near Arenzano, Italy, who already had a great devotion to the Infant Jesus.

In 1914, the Salesians were building a grand church in Barranquilla, Colombia, in an extremely poor locale. The Superior asked Father Rizzo to ask for donations from the people for the construction of the new church, something he was reluctant to undertake because of the immense poverty of these people, so much so that when he returned to the rectory he had not collected a cent! The next day, the Superior asked him to go out again and gather the necessary donations. This time, Father knelt in front of the Blessed Mother to ask her help in this difficult assignment. In seeing the Child Jesus in the arms of His Mother, Father John thought to himself that up to now, he had asked for favors through Mary’s intercessions, but he had not brought his prayer requests directly to the Child Jesus. Father John decided that he would entrust all his efforts to the Child Jesus. The following day, full of anguish he went to pray before the statue of Mary, Help of Christians. Then with all his soul, he pleaded that the Holy Child give him the courage to beg for the works of God. His prayers were answered. Raising his eyes, he saw the little Child Jesus, smiling with His arms outstretched as if to say "Take me with you. I want to accompany you." From that time, he became a great apostle of the Holy Child. He spoke of Him, he worked for Him, and he dedicated his life and all his energy to promote devotion to the Infancy of Our Lord.

In 1935, Father Rizzo was transferred to a poor section in the south of Bogota called the Barrio Veinte de Julio, or twentieth of July. Convinced that it pleased God to honor Our Lord in His Infancy, Father wanted to initiate the devotion in his new parish. 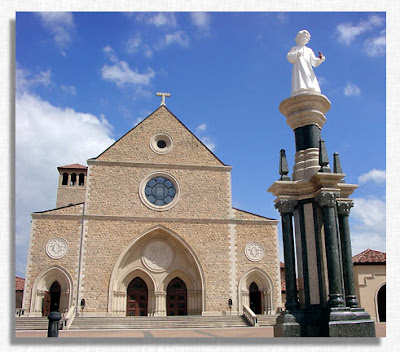 In a store in Bogota called Vaticano, owned by an Italian artist, Father Rizzo found a beautiful antique statue of the Christ Child. Smiling, with his little hands held out, the image was backed with a cross. In his usual easy, jocular manner, Father Rizzo said, "What! So little and already you want to crucify Him? Take off that cross and I will take it." Father also asked the artist to place the words "Yo Reinare" (I will reign) at the base of the statue. The artist made the requested change and Father Rizzo took the statue with him back to the barrio, where he preached to the people about the favors that the Christ Child does for those who have faith and who help the poor. Here, too, he built a small chapel in honor of the Divine Child. Soon, miracles and prodigies began to be reported.

On the 25th of December 1937, the cornerstone was blessed for the new church in Bogota. Father Rizzo had hoped for larger church, but the Superiors did not want anything too extravagant. Father often lamented that the plans for the new structure were too small. Due to his vow of obedience, Father had to resign himself to the plans for a smaller edifice. As he had predicted, the large number of people that attended the Sunday Masses proved all too quickly that the new church was too small. More than on hundred thousand people visit the church every Sunday. By 1989, plans were undertaken to construct a new church, much larger than the one built before, and it was completed in 1992, thanks to the generosity of the many faithful that frequently visit the church. This new church is called a sanctuary, a place where many, many miracles have taken place because of the faith of the people, which in turn leads to even more miracles taking place.

Father John Rizzo died in 1957 but it was his devotion to the Child Jesus that was the impetus for the requests that yielded the miracles. His entire life was dedicated to propagating devotion to the Child Jesus. Every morning, Father John donated chocolate and bread to the poor people in the region. Thanks to the generosity of the people, hundreds of poor children continue to visit the sanctuary every morning to receive chocolate and bread. In all this time, even today, there has not been any need to purchase the chocolate or the bread that is distributed, since all of it is obtained through the abundant donations of the faithful. The statue that can be seen today in Bogota was the very one which Father John himself purchased in Bogota from the artisan. This beautiful statue of Jesus as a Child, dressed in a pink tunic, with His arms wide open to receive us, and His innocent and loving smile is probably one of the most dear representations of Our Lord’s Infancy; it invokes in us a desire to embrace Him and entrust all our cares into His loving arms.

You can also read a homily on this devotion from Fr. Miguel Marie Soeherman, MFVA by clicking here.