Remembering the Catholic Martyrs of China 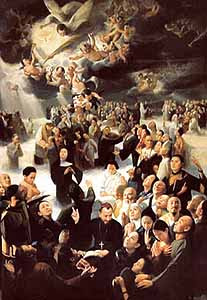 Today the Catholic Church remembers the martyrs of China. As many as 20,000 Christians were killed for their faith during the Boxer rebellion and today we commemorate some of them. Pope John Paul II canonized a group of 120 of them on October 1, 2000. To read more about them please look to the article below:

The Church was built on the blood of the martyrs. Nowhere is this more evident than in Rome, the Eternal City, with its Coliseum consecrated by the blood of the early Christians. Rome is a living testament to the holy sacrifices of men and women who have died for Christ and for the truths of his Church. The image of our first Pope, Peter—being crucified upside down—appears on the front door of the basilica named after him.

Not far from St. Peter’s is Sant’Ignazio di Loyola, where honor is given to those who gave their lives far from Rome. Andrea Pozzo’s ceiling fresco depicts the spiritual children of St. Ignatius who brought the faith to other lands. China was one of those lands, and her soil, like Rome’s, is crowned with the blood of Christian martyrs, many of whom faced their violent deaths singing the Te Deum ("We praise thee, O God: We acknowledge thee to be the Lord"). We should not call China a "pagan land," for she too has given witness to the Catholic faith; she too has laid the foundation upon which the Church is built.

The history of Christianity in China is long, beginning in the seventh century with the Nestorian missionary Alopen, a Syrian follower of the heretical Bishop Nestorius. Alopen was quite successful in disseminating the Christian faith—although in an imperfect form—to many of China’s elite. Nestorianism, though, was suppressed in 845 by the Tang emperor, Wuzong, who believed that the foreign religions of Christianity and Buddhism would corrupt the purity of China’s Confucian culture.

Unlike the Catholic missionaries who arrived in China centuries later, the Nestorians were not executed for their faith in Christ, but their monasteries were closed and the Syrian clergy were expelled from China. During the Tang dynasty (618–906) China held several thousand Nestorian monasteries. Other than the very limited successes of the Franciscan missionaries of the thirteenth century, it was not until the sixteenth century that Catholic missionaries successfully planted the seeds of Christianity in the vineyard of East Asia.

To continue reading please click here.
Posted by Padre Steve at 6:06 AM