One of the great American heroes of the Vietnam War was Fr. Vincent Capodanno. This priest hero is a reminder of what real courage and sanctity look like! The following is a summary of his life found on Wikipedia:

Fr. Vincent Capodanno (February 13, 1929–September 4, 1967) was a United States Navy chaplain and a recipient of America's highest military decoration - the Medal of Honor - for actions during the Vietnam War. He had been a Maryknoll Missionary Priest in Tiawan and Hong Kong before he began looking for a different challenge. Father Capodanno requested a new assignment--as a United States Navy Chaplain serving with the U.S. Marines. After finishing officer candidate's school, Father Capodanno reported to the 7th Marines, in Vietnam, in 1966. When his tour was complete, he requested an extension, served in the naval hospital and then reported to the 5th Marines. He gained a reputation for always being there--for always taking care of his Marines.

At 4:30 am, September 4th, 1967 , in the Thang Binh District of the Que-Son Valley, elements of the 1st Battalion, 5th Marines found the large North Vietnamese Unit, approx. 2500 men, near the village of Dong Son. Operation Swift was underway. The out-numbered and disorganized Company D was in need of reinforcements. By 9:14 am, twenty-six Marines were confirmed dead. The situation was in doubt and another Company of Marines was committed to the battle. At 9:25 am, the 1st Battalion 5th Marine Commander requested assistance of two company's of the 3rd Battalion 5th Marines, "M"and "K" Company. 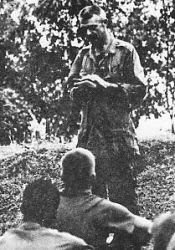 During those early hours, Chaplain Capodanno received word of the battle taking place. He sat in on the morning briefing at the 3rd Battalion's Combat Operations Center. He took notes and listened to the radio reports coming in. As the elements of Company "M" and "K" prepared to load the helicopters. "Fr.Vince" requested to go with them. His Marines needed him. "It's not going to be easy" he stated. As Company "M" approached the small village of Chau Lam, the North Vietnamese opened up on the 2nd Platoon, which was caught on a small knoll, out in the open. The fighting was fierce, hand to hand at times, and the platoon was in danger of being overrun. Father Capodanno went among the wounded and dying, giving last rites and taking care of his Marines. Wounded once in the face and suffering another wound that almost severed his hand, Father Capodanno moved to help a wounded corpsman only yards from an enemy machinegun. Father Capodanno died taking care of one of his men.

On December 27, 1968, then Secretary of the Navy Paul Ignatius notified the Capodanno family that Fr. Vincent would posthumously be awarded the Medal of Honor in recognition of his selfless sacrifice. The offical ceremony was held January 7, 1969. You can read more about his life and the cause for his canonization here.

Padre Steve
I LOVE Father Capodanno! My kiddos were mesmerized by his story that I read to them a while back.

Thank GOD for Military Chaplains, we need alot more of them!