Incredible but true: Our Lady of Las Lajas! 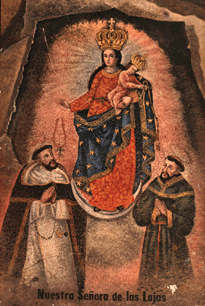 Historians and scientists are at a loss to explain this fabulous image on the wall of a Colombian cave. It may forever remain a mystery.

Back in the eighteenth century, María Mueses de Quiñones, a local woman from the village of Potosi, Colombia, often walked the six miles between her village and the neighbouring one of Ipiales. One day in 1754 as she was making the journey, she approached the place called Las Lajas (the Rocks), where the trail passes through a deep gorge of the Guaitara River. Maria never liked this part of the trail because there were rumours a cave in the Lajas was haunted. Superstitions remained among the converted Christian Indians.

Maria was carrying her daughter Rosa, a deaf-mute, on her back. And by the time she had climbed to the Lajas she was weary and sat on a rock to rest. The child got down from her back to play. Next thing Rosa was by the cave shouting: “Mommy, there is a woman in here with a boy in her arms!” Maria became very frightened. This was the first time she had ever heard her daughter speak! She didn't see the figures the girl was talking about, nor did she want to. She grabbed the child and ran on to Ipiales.

When she told what happened nobody took her seriously at first. However, as the news spread some asked if maybe it was true. After all, the child was now able to speak. A few days later the child Rosa disappeared from home. After looking everywhere the anguished Maria guessed it: her daughter must have gone to the cave. She often said that the woman was calling her. Maria ran to Las Lajas to find her daughter kneeling in front of a splendid woman and playing affectionately with a child who had come down from His mother’s arms to let the girl enjoy His divine tenderness. Maria fell to her knees before this beautiful spectacle; she had seen the Blessed Virgin. 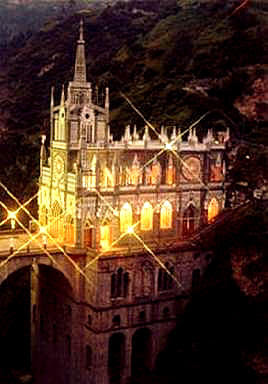 Fearful of ridicule, Maria kept quiet about the event. But frequently she and Rosa went to the cave to place wild flowers and candles in the cracks of the rocks.
The months went by, with María and Rosa keeping their secret. Until one day the girl fell gravely ill and died. A distraught Maria decided to take her daughter’s body to the Lajas to ask the Lady to restore Rosa to life.

Pressed by the sadness of Maria’s unrelenting supplications, the Blessed Virgin obtained Rosa’s resurrection from Her Divine Son. Overflowing with joy, Maria went home. It didn’t take long for a crowd to gather. Early next morning everyone went to Las Lajas, each wanting to check the details for themselves.

That was when the marvellous picture of Our Lady on the wall of the grotto was discovered. Maria Muese de Quinones could not recall noticing it until then. The child Jesus is in Our Lady’s arms. On one side of Our Lady is Saint Francis; on the other is Saint Dominic. Her delicate and regal features are those of a Latin American, perhaps an Indian. Her abundant black hair covers her like a mantle (The two-dimensional crown is metal and was added by devotees much later on). Her eyes sparkle with a pure and friendly joy. She looks about fourteen years old. The indians had no doubt: this was their queen.

As devotion to the image grew, a good road replaced the old trail. In the early 20th century a tasteful gothic church was built over the cave.
But who put this magnificent image there? The author has never been identified! Scoffers say the wily Dominicans sneaked in a good artist, and the gullible indians are still being fooled.

But tests done when the church was built show how stupendous this image actually is. Geologists from Germany bored core samples from several spots in the image. There is no paint, no dye, nor any other pigment on the surface of the rock. The colours are the colours of the rock itself. Even more incredible, the rock is perfectly coloured to a depth of several feet!

So the mystery remains unsolved. Did angels do it? Or did God Himself do it at the dawn of creation, when he contemplated the most excellent of all His creatures? The One whom He would make Queen of Heaven and Earth. And to whose maternal care the future nation of Colombia would be entrusted.

To learn more about Our Lady of Las Lajas click here. 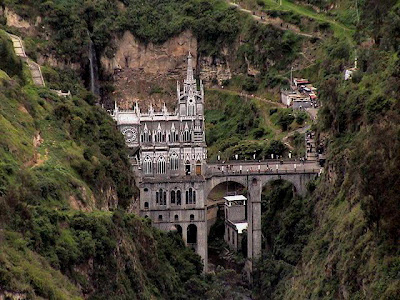 Thank you for this, it is a wonderful article! God bless.

Is there a novena to Our Lady of Las Lajas? Just curious as I only read about her today from an email sent to me a long while and never got around to opening. Just so happens that today I learned that I have 100% hearing loss in one ear and 25% in the other. I will pray to Our Blessed Mother of Las Lajas to miraculously restore my hearing as she did for the visionary's daughter who was deaf and mute.

Thank you and God bless you for sharing this beautiful story.