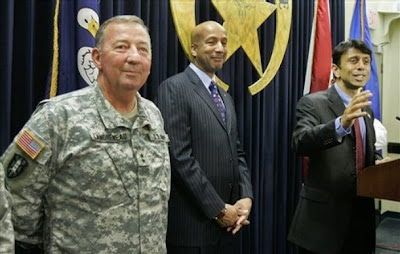 Governor Bobby Jindal and Mayor Ray Nagin are being praised for their response to Hurricane Gustav! Newsmax has the following article on the subject:

NEW ORLEANS -- If Hurricane Katrina was one big lesson in government bungling, Gustav has been an open-book test of whether the politicians learned anything from the disaster.

And so far, Louisiana Gov. Bobby Jindal and Mayor Ray Nagin are getting high marks.

In the days leading up to Gustav, Jindal and Nagin persuaded a sometimes complacent populace to get out well ahead of the storm. They didn't mince words; they didn't hedge bets. In the end, they were credited with overseeing the exodus of 2 million people in one of the biggest and smoothest evacuations in U.S. history.

That take-charge attitude in a crisis could bring political rewards, especially for Jindal, a 37-year-old Republican once mentioned as a potential running mate for John McCain.

"You've got a governor who took charge," said Jim Duffy, a Louisiana native and national political consultant who has worked for several Louisiana Democrats. "It helps him a great deal. He already had a reputation of being this wunderkind."
To read the rest of the article please click here.
Posted by Padre Steve at 5:58 AM