The urgent need to proclaim the Gospel 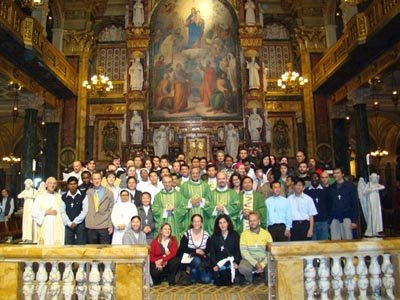 The Rector Major of the Salesians, Fr. Pascual Chavez, commissioned the newest group of Salesian Missionaries! This is the 139 group that has been sent from the Basilica of Mary, Help of Christians to proclaim the Good News! The group consisted of Salesian priests, brothers, sisters and lay people. The Salesian News Service article is below:

Yesterday, 28 September, in the Basilica of Mary Help of Christians in Valdocco, Turin, there was the celebration of the missionary mandate and the presentation of the crucifix for the 139th Salesian missionary expedition. Presiding at the Mass broadcast live on streaming by www.missionidonbosco.tv and televised by Telepace, was the Rector Major of the Salesians, Fr Pascual Chávez. The celebration was introduced by the reading of an account of the first Salesian missionary expedition, which took place in the same Basilica on 11 November 1875.

Fr Vaclav Klement, Councillor for the Missions, introduced the missionary groups and individuals, Salesians and lay people mentioning where they were going to; Sr Ciri Hernández, General Councillor for the Mission of the Daughters of Mary Help of Christians then introduced the 7 Sisters ready to leave, speaking on behalf of Mother Antonia Colombo and the 192 Chapter Members gathered in Rome. Side by side with the Salesians and the Daughters of Mary Help of Christians on the 139th missionary expedition were some lay volunteers from Poland, Italy and other countries brought together by the Warsaw Missionary Centre and the International Volunteers for Development.

In his homily, Fr Chávez presented almost in its entirety the Message of the Holy Father for World Mission Day this year, since it was “particularly illuminating and constructive.” In it Benedict XVI, recalls that the missionary mandate is an absolute priority for all the baptised, “servants and apostles of Christ Jesus,” and proposes the apostle Paul as the model of an apostolic commitment consumed with “the need to evangelise.”

During his homily, interrupting his reading of the message, the Rector Major proposed an extraordinary missionary expedition for 2009, the year in which the 150th anniversary of the founding of the Salesian Congregation occurs. “At least 100!” declared the IX successor of Don Bosco, asking from each Province the gift of a missionary.

Afterwards, Fr Chávez invited the new missionaries to have Jesus as their model for evangelisation and to make their own, as the apostle Paul suggests, his sentiments: “to serve our neighbour with the greatest humility.” “Here then the model of real inculturation, which is indispensable for evangelising and touching the heart of the culture of peoples and like leaven transforming it.” The Rector Major went on: “Being part of the «missio ad gentes» implies freeing ourselves from all that could separate us from the people to whom we are being sent, from our presumptions, from our knowing it all, from our academic qualifications, from our economic resources, and humbly to begin, like children, to learn their language, to get to know their culture, to appreciate all that they have that is good, true, beautiful, in a word to love them as Christ loved even to giving his life for them.”

“Your commitment to the mission and the Holy Eucharist are your path of sanctification,” Fr Chávez said before completing his homily and entrusting the new missionaries to the intercession of the apostle Paul and of Mary Help of Christians, Star of Evangelisation.

In presenting the crucifix to the departing missionaries, the IX successor of Don Bosco said: “receive the sign of the love of Christ the Redeemer. May it be for you the support and the model of a genuine and faithful love. May you be the smile and the tender presence of Jesus among the young people to whom you are being sent.”

Among those present at the celebration, in addition to many other Salesians, were Fr Stefano Martoglio, Provincial of the Special Circumscription of Piedmont and the Val d’Aosta, and Fr Maurizio Spreafico, Provincial of the Middle East.
Posted by Padre Steve at 12:09 PM