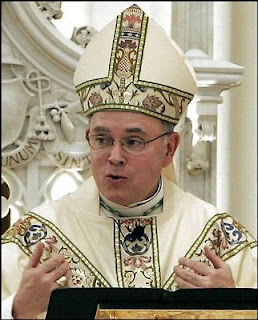 Addressing a conference in British Columbia, Archbishop Charles Chaput of Denver asserted that Catholics today have failed to transmit the faith to the next generation, which has resulted in young people losing their “moral vocabulary.”

The Denver prelate made his remarks on Oct. 15 at the “Faith in the Public Square” seminar sponsored by the Diocese of Victoria. He opened his speech with a reference to Shirley Jackson’s famed short story “The Lottery.”

Jackson’s story – set in rural 1940s America – features the tale of a small town that gathers every year to implore an unnamed force to grant a good corn harvest the people. Each year, town members draw a piece of paper from a wooden box to see who will be chosen for human sacrifice. A young mother ends up drawing the ominous black slip and is stoned to death by the community as part of the annual ritual.

Reflecting on Jackson’s piece, Archbishop Chaput cited professor Kay Haugaard’s analysis on how young people in academia in decades past would react passionately to the tale with intense classroom debate and discussion.

“She said that in the early 1970s, students who read the story voiced shock and indignation,” Archbishop Chaput noted. “The tale led to vivid conversations on big topics – the meaning of sacrifice and tradition; the dangers of group-think and blind allegiance to leaders; the demands of conscience and the consequences of cowardice.”

“Sometime in the mid-1990s, however, reactions began to change,” he said.

“Haugaard described one classroom discussion that – to me – was more disturbing than the story itself. The students had nothing to say except that the story bored them. So Haugaard asked them what they thought about the villagers ritually sacrificing one of their own for the sake of the harvest.”

“One student, speaking in quite rational tones, argued that many cultures have traditions of human sacrifice,” the archbishop continued. “Another said that the stoning might have been part of ‘a religion of long standing,’ and therefore acceptable and understandable.”

Another student brought up the idea of “multicultural sensitivity,” saying she learned in school that if “it’s a part of a person’s culture, we are taught not to judge.”

“I thought of Haugaard’s experience with 'The Lottery' as I got ready for this brief talk,” the prelate explained.

“Our culture is doing catechesis every day. It works like water dripping on a stone, eroding people’s moral and religious sensibilities, and leaving a hole where their convictions used to be.”

“Haugaard’s experience,” he added, “teaches us that it took less than a generation for this catechesis to produce a group of young adults who were unable to take a moral stand against the ritual murder of a young woman.”

“Christians in my country and yours – and throughout the West, generally – have done a terrible job of transmitting our faith to our own children and to the culture at large,” Archbishop Chaput remarked.

“Instead of changing the culture around us, we Christians have allowed ourselves to be changed by the culture. We’ve compromised too cheaply. We’ve hungered after assimilating and fitting in. And in the process, we’ve been bleached out and absorbed by the culture we were sent to make holy.”

“We need to confess that, and we need to fix it,” he asserted. “For too many of us, Christianity is not a filial relationship with the living God, but a habit and an inheritance. We’ve become tepid in our beliefs and naive about the world. We’ve lost our evangelical zeal. And we’ve failed in passing on our faith to the next generation.”

Renewing Catholic catechesis then, Archbishop Chaput added, “has little to do with techniques, or theories, or programs, or resources.”

“The central issue is whether we ourselves really do believe. Catechesis is not a profession. It’s a dimension of discipleship. If we’re Christians, we’re each of us called to be teachers and missionaries.”

However, the Denver prelate noted, “we can’t share what we don’t have.”

“If we’re embarrassed about Church teachings, or if we disagree with them, or if we’ve decided that they’re just too hard to live by, or too hard to explain, then we’ve already defeated ourselves.”

“We need to really believe what we claim to believe,” he stressed. “We need to stop calling ourselves ‘Catholic’ if we don’t stand with the Church in her teachings – all of them.”

In his concluding remarks, Archbishop Chaput added that “if we really are Catholic, or at least if we want to be, then we need to act like it with obedience and zeal and a fire for Jesus Christ in our hearts.”

“God gave us the faith in order to share it. This takes courage. It takes a deliberate dismantling of our own vanity. When we do that, the Church is strong. When we don’t, she grows weak. It’s that simple.”
Posted by Padre Steve at 9:30 AM