In honour of the new Servant of God Fr Andrej Majcen, SDB 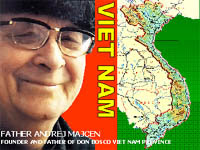 The following comes from the Salesian News Agency:
On Thursday September 30, 2010, on the occasion of the 106th anniversary of the Birthday of Rev. Fr. Andrej Majcen, on the occasion of the 11th year of his death, and shortly after the opening of the diocesan enquiry for his beatification, the Rinaldi Theologate Community, at Xuan Hiep, Thu Duc, Viet Nam organised a “Small Congress” in honour of the “Patriarch of the Salesians in Vietnam.

At the beginning, each one offered incense to him as a mark of homage. Then, Fr. Dominic Uyen, his first novice in 1960-1961, gave a speech about his life, in which he stressed especially: his spirit of joy and working with others, his “being uptodate,” his “spirit of being with Don Bosco and the times”, in particular his charismatic dimension as a founder of the Salesian works in Viet Nam.

Then with a powerpoint presentation, Father Rector gave an account of the life of Fr. Andrej Majcen from his childhood until his final days in Slovenia, with some particular emphasis on the period of his life and work in Viet Nam which he loved so much.
With songs and through their active participation, all the confreres of the Community expressed their love and their desire to follow Don Bosco in the footsteps of the New Servant of God : “Imitate me as I imitate Don Bosco”.

The “Small Congress” ended with a prayer in honour of the Servant of God and on behalf of Lay-Bro. Peter Sang suffering from cancer.
Posted by Padre Steve at 9:28 AM