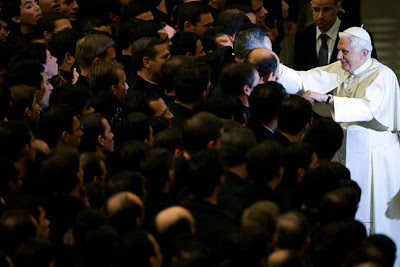 The following comes from the Zenit.org site:


In a letter to seminarians, Benedict XVI affirmed that the priesthood is not something of the past, but is needed for the future, as people will always need ministers to bring them to God.

In the message published today, but which was written for the end of the Year for Priests, which ended in June, the Pope recalled a conversation he had with a military commander in 1944, after being drafted for the service.

The Pontiff recounted: "The company commander asked each of us what we planned to do in the future. I answered that I wanted to become a Catholic priest.

"The lieutenant replied: 'Then you ought to look for something else. In the new Germany priests are no longer needed.'

"I knew that this 'new Germany' was already coming to an end, and that, after the enormous devastation which that madness had brought upon the country, priests would be needed more than ever."

The Holy Father noted that "many people nowadays also think that the Catholic priesthood is not a 'job' for the future, but one that belongs more to the past."

Yet, he added, "people will always have need of God, even in an age marked by technical mastery of the world and globalization."

"Where people no longer perceive God, life grows empty; nothing is ever enough," Benedict XVI observed. "People then seek escape in euphoria and violence; these are the very things that increasingly threaten young people."

He affirmed, "God is alive, and he needs people to serve him and bring him to others."

"It does make sense to become a priest," the Pope asserted. "The world needs priests, pastors, today, tomorrow and always, until the end of time."

The Pontiff outlined several elements that are important in the life of a seminarian. He stressed the need for them to be men of God, to live their relationship with Christ centered on the Eucharist, and to frequent the sacrament of penance.

The Holy Father urged the seminarians to "retain an appreciation for popular piety" as "one of the Church's great treasures."

He underlined the importance of study, "to understand and appreciate the internal structure of the faith as a whole, so that it can become a response to people's questions."

Benedict XVI highlighted the need for growth toward human maturity in the years of preparation for the priesthood, especially "the integration of sexuality into the whole personality."

"Recently we have seen with great dismay that some priests disfigured their ministry by sexually abusing children and young people," he noted. "Instead of guiding people to greater human maturity and setting them an example, their abusive behavior caused great damage for which we feel profound shame and regret."

"As a result of all this," the Pope stated, "many people, perhaps even some of you, might ask whether it is good to become a priest; whether the choice of celibacy makes any sense as a truly human way of life."

He continued: "Yet even the most reprehensible abuse cannot discredit the priestly mission, which remains great and pure.

"Thank God, all of us know exemplary priests, men shaped by their faith, who bear witness that one can attain to an authentic, pure and mature humanity in this state and specifically in the life of celibacy."

"Admittedly, what has happened should make us all the more watchful and attentive," the Pontiff said, "precisely in order to examine ourselves earnestly, before God, as we make our way towards priesthood, so as to understand whether this is his will for me."

The Holy Father added, "It is an essential part of your journey to practice the fundamental human virtues, with your gaze fixed on the God who has revealed himself in Christ, and to let yourselves be purified by him ever anew."
Posted by Padre Steve at 9:55 AM