Pope Benedict: Elizabeth of Hungary a model for those in authority 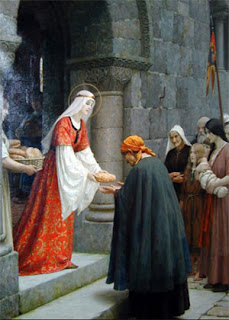 In his weekly general audience Oct. 20, the Pope said that St. Elizabeth of Hungary, a daughter of royalty, should be a model for all who hold authority in society.

Elizabeth was born in 1207, the daughter of Hungary’s King Andrew II. Yet her privileged upbringing never led her to compromise her faith or lord her position above her subjects, Pope Benedict XVI said.

She "behaved before God as she behaved towards her subjects," he said, calling her "a true example for everyone who holds positions of leadership.”

"The exercise of authority at all levels, must be practiced as a service to justice and charity, in the constant search for the common good," the Pope said.

Elizabeth managed to develop a "sincere love" for her husband Ludwig despite the fact the their union was arranged for political reasons when she was very young. It was at his death that she dedicated herself fully to the care of the poor, bringing herself closer to them in her relationship with the religious order, the Franciscan Friars Minor.

She helped to found a Franciscan hospital in the town of Marburg, Germany and from there served the poor until her own death at the young age of 24. St. Elizabeth was canonized just four years after her death.

In Elizabeth, the Pope said, "we see how faith and friendship with Christ, create a sense of justice, of universal equality, of the rights of others, and foment love and charity. From this charity comes hope, the certainty that we are loved by Christ, that the love of Christ awaits us, thus making us capable of imitating Christ and of seeing Him in others."

The Holy Father prayed that Elizabeth's "dedication to the poor and needy inspire in us the same love for Christ in our neighbor."

The Pope’s teaching on Elizabeth is the seventh in a series of weekly reflections that he has been offering on the holy women of Church history. The series began with the Pope’s general audience Sept. 1.
Posted by Padre Steve at 5:00 AM

Thanks for posting this! I am reading St Elizabeth's Three Crowns to my 9 year old daughter. She's already decided to be St. Elizabeth for All Saints Day. I showed her this clip this morning. How neat for her to watch and listen to the Pope himself praise someone she is so taken with!