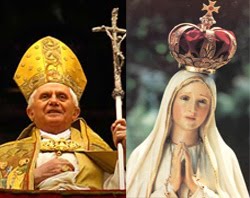 "To the heavenly Mother of God I entrust you, dear young people, so that you will be able to respond generously to the Lord's call," he said.

"May Mary be for you, dear sick people, a comfort in your pains," the Pope continued, "and accompany you, dear newlyweds, in your incipient family path."
Our Lady of Fatima appeared to three shepherd children in Fatima, Portugal, on the 13th day of each month for six months in 1917, beginning in May and ending in October.
Posted by Padre Steve at 8:00 AM