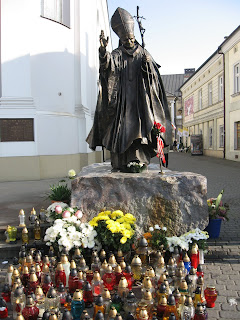 Pope John Paul II's hometown of Wadowice, Poland is promoting a pair of initiatives in his honor. Between a museum and an interesting memorial project planned for the city square that already bears his name, the late-Pontiff will not soon be forgotten.


Karol Wojtyla, the future Pope John Paul II, was born in the southern city of Wadowice on May 18, 1920. After moving to nearby Krakow for studies at the age of 18, he never again lived in his hometown but returned at every opportunity, even as Pope.


The city, which also celebrated the 90th anniversary of John Paul II's birth this year, saw the late-Pope's personal secretary Stanislaw Dziwisz and mayor Ewa Filipiak lay the cornerstone for a museum to be dedicated to his life on Tuesday, according to the AP. The stone was placed outside his former home, a two-bedroom apartment, which will be made to appear as it was during his childhood. The neighboring residences will also be used to offer exhibits telling the story of his life as part of the museum that will be opened in 2012.


According to the Polish Press Agency (PAP), there is another memorial project underway, this one involving Wadowice's John Paul II Square. The $2.5 million project to repave the square, formerly known as the "Red Army Square," will incorporate at least 90 custom-made stones carrying the names of Polish cities he visited during his pontificate and the dates he visited them.


The well over 100 countries John Paul II visited during his pontificate are also being invited to sponsor stones for the project which is scheduled to be completed in 2012.
Posted by Padre Steve at 9:43 AM