Fr. Robert Barron comments on St. Thomas More and the Bishop of Rome 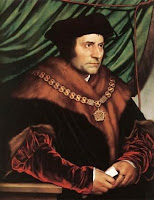 His belief that no lay ruler has jurisdiction over the Church of Christ cost Thomas More his life.
Beheaded on Tower Hill, London, July 6, 1535, he steadfastly refused to approve Henry VIII’s divorce and remarriage and establishment of the Church of England.

Described as “a man for all seasons,” More was a literary scholar, eminent lawyer, gentleman, father of four children and chancellor of England. An intensely spiritual man, he would not support the king’s divorce from Catherine of Aragon in order to marry Anne Boleyn. Nor would he acknowledge Henry as supreme head of the Church in England, breaking with Rome and denying the pope as head.

More was committed to the Tower of London to await trial for treason: not swearing to the Act of Succession and the Oath of Supremacy. Upon conviction, More declared he had all the councils of Christendom and not just the council of one realm to support him in the decision of his conscience.
Read more here.
Posted by Padre Steve at 5:00 AM