Pope Benedict: God makes himself present in 'a thousand ways 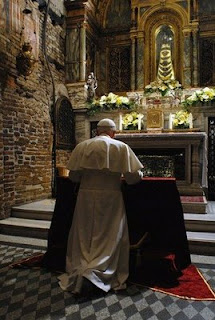 God has “a thousand ways” to touch souls and to teach them how to "really live," Pope Benedict XVI told a crowd of more than 25,000 pilgrims in St. Peter’s Square on Oct. 13.


Continuing his series of teachings on holy women in the Church’s history, the Pope turned to the 13th-century mystic, Blessed Angela of Foligno in his weekly general audience.

Blessed Angela’s life has much to teach people today, many of whom are “living as if God did not exist,” the Pope said.

The lesson of her life, he said, is that “God has a thousand ways, for each of us, to make himself present in the soul, to show that he exists and knows and loves me."

Born into wealth and privilege, Blessed Angela led a carefree life until in her late-30s, when personal tragedies made her aware of her sinfulness. She made a confession after receiving a vision of St. Francis of Assisi. Following the death of her husband and children, she entered the Franciscan Third Order.

Her story is retold in the "Book of Blessed Angela of Foligno," composed from the writings of the friar who served as her confessor. The book details how she overcame fear of sin and punishment through ever greater love for God. It also describes the many mystical experiences that marked her life, but which she found difficult to put into words.

This book, the Pope said, is a guide for others seeking to turn to God. Blessed Angela’s life, he added, shows how the Lord touches the soul so that one can learn the "way with God and towards God."

"From conversion to mystical union with the crucified Christ, to the inexpressible," a "high path" marked her life, the Holy Father observed, noting that her "secret" was constant prayer.

The Pope delivered his teaching on a beautiful fall morning in Rome. Among those attending the audience was a Scottish group led by Scottish Cardinal Keith O'Brien of St. Andrews and Edinburgh who still carried the plaid scarf he received during the Pope’s visit to his country last month.

"We pray that the Lord makes us aware of the signs of his presence," Pope Benedict concluded, "that he teaches us to really live."
Posted by Padre Steve at 3:51 PM