Saint of the day: Albert Chmielowski 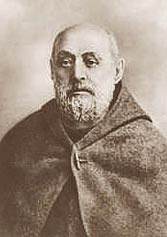 Born to a wealthy aristocratic family, he initially studied agriculture in order to manage the family estate. Involved in politics from his youth, he lost a leg at age 17 when injured while fighting in an insurrection. In Krakow, he became a popular, well-known and well-liked artist. His interest in politics and art made him keenly aware of the human misery around him. A gentle and compassionate soul, he felt called to help those in need. After years of reflection, he understood that this desire was how God was calling him to service and Himself.

Franciscan tertiary, taking the name Albert. He abandoned painting, and began a life of working with and for the poorest of Krakow. In 1887 he founded the Brothers of the Third Order of Saint Francis, Servants of the Poor, known as the Albertines (named for him) or the Gray Brothers (after their rough gray habits). In 1891 he founded the women's congregation of the Order (Gray Sisters). The Albertines organized food and shelter for the poor and homeless.
Albert preached that the great calamity of our time was that so many refused to see and voluntarily relieve the suffering of their miserable brothers and sisters. The "haves" lived away from the "have-nots" in order to ignore them and leave their care to others.
In 1949, Pope John Paul II wrote a well-received play about Albert; the work was filmed in 1997, released as Brother of Our God. Albert was the spiritual teacher of Blessed Maria Bernardina Jablonska.
Posted by Padre Steve at 8:00 AM