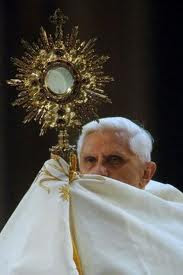 The following comes from the Women of Faith and Family site:

The Solemnity of Corpus Christi commemorates the institution of the Holy Eucharist, paralleling Maundy Thursday (Holy Thursday) commemorating Our Lord's institution of the Eucharist. Corpus Christ was introduced in the late 13th century to encourage the faithful give special honor to the institution of the Holy Eucharist to the Blessed Sacrament. The official title of this Solemnity was changed in 1970 to The Body and Blood of Christ (Latin: Sollemnitas Sanctissimi Corporis et Sanguinis Christi); and it is still on the Roman Missal’s official Calendar for the universal Church on Thursday after Trinity Sunday; however, where it is not a day of obligation (as in the United States) it is usually celebrated on the Sunday following Trinity Sunday.

Corpus Christi became a mandatory feast in the Roman Church in 1312. But nearly a century earlier, Saint Juliana of Mont Cornillon, promoted a feast to honor the Blessed Sacrament. From early age Juliana, who became an Augustinian nun in Liége, France, in 1206, had a great veneration for the Blessed Sacrament, and longed for a special feast in its honor. She had a vision of the Church under the appearance of the full moon having one dark spot, which signified the absence of such a solemnity. She made known her ideas to the Bishop of Liége, Robert de Thorete, to the Dominican Hugh who later became cardinal legate in the Netherlands, and to Jacques Panaléon, at the time Archdeacon of Liége and who later became Pope Urban IV. Bishop Robert de Thorete ordered that the feast be celebrated in his diocese.

Pope Urban IV later published the Bull Transiturus (September 8, 1264), in which, after having extolled the love of Our Savior as expressed in the Holy Eucharist, ordered the annual celebration of Corpus Christi on the Thursday after Trinity Sunday. More than four decades later, Pope Clement V published a new decree which embodied Urban IV's decree and ordered the adoption of the feast at the General Council of Vienna (1311). Pope John XXII, successor of Clement V, urged this observance.

The processions on Corpus Christi to honor the Holy Eucharist were not mentioned in the decrees, but had become a principal feature of the feast's celebration by the faithfl, and became a tradition throughout Europe. These processions were endowed with indulgences by Popes Martin V and Eugene IV.
Posted by Padre Steve at 7:48 AM