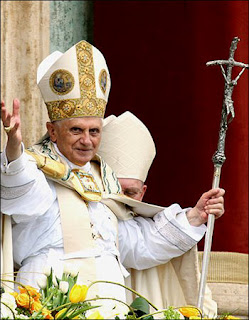 Benedict XVI is expressing satisfaction that his reflection on the crisis in Christian life has taken concrete form in the new Pontifical Council for Promoting New Evangelization.
But the council, the Pope said today as he addressed its members at the conclusion of their first plenary assembly, has its work cut out for them.
Modern man is "often distracted and insensitive," he observed. "Because of this, the New Evangelization will have to be responsible for finding the methods to make the proclamation of salvation more effective."
The Holy Father's address was one of encouragement as he recalled his June 2010 announcement that set in motion the Curia's newest organization.
Though secularization has left "heavy traces even in countries with a Christian tradition," he said, the Gospel "is the ever new proclamation of the salvation wrought by Christ to render humanity a participant in the mystery of God and in his life of love and to open it to a future of sure and strong hope."
Proclaiming Christ, the only Savior of the world, might seem more complex today than in the past, the Pontiff acknowledged, "but our task remains the same as at the dawn of our history. The mission has not changed, just as the enthusiasm and the courage that moved the Apostles and the first disciples must not change.
"The Holy Spirit who pushed them to open the doors of the Cenacle, making them into evangelizers, is the same Spirit that moves the Church today in a renewed proclamation of hope to the men of our time."
Vigor
The "new" in a new evangelization, Benedict XVI proposed, is "intensifying missionary action to correspond fully with the Lord's mandate."
"In the course of the centuries the Church has never ceased to proclaim the salvific mystery of the death and resurrection of Jesus Christ, but that same proclamation today needs a renewed vigor to convince contemporary man, often distracted and insensitive," he said.
The Bishop of Rome said that even those who still maintain a link to their Christian roots need to understand that the faith is not a uniform to put on and take off at will, but rather "something alive and all-encompassing, able to take up all that is good in modernity."
He urged the pontifical council members to devise a plan that can help the universal Church and particular Churches, one that is mindful of the lack of formation in younger generations.
And the key to success, the Holy Father reflected, citing Pope Paul VI, is holiness: "It is therefore primarily by her conduct and by her life that the Church will evangelize the world, in other words, by her living witness of fidelity to the Lord Jesus -- the witness of poverty and detachment, of freedom in the face of the powers of this world, in short, the witness of sanctity."
Posted by Padre Steve at 3:01 PM