Andrew Jackson and Our Lady of Prompt Succor

The following comes from the American Catholic site:
When one thinks of Andrew Jackson, Our Lady of Prompt Succor and the Ursuline nuns do not spring to mind, but they should.

In 1814 the War of 1812 was going badly for the United States. With the abdication of Napoleon, hordes of British veteran troops were sent across the Atlantic to teach the Yankees a lesson. The burning of Washington in August 1814 was part of the lesson, and the American government had intelligence that a mighty British fleet and army were on their way to seize New Orleans. In August 1814 a British fleet established a base, with the consent of the Spanish government, at Pensacola, Florida, and used it to supply Indians hostile to the US. On November 7, 1814, Jackson seized Pensacola, chased the British troops out and destroyed the fortifications. The British fleet sailed off and Jackson marched to New Orleans. Jackson arrived at New Orleans with his rough frontier army of militia and regulars on December 2, 1814. Space in a blog post does not allow me to detail the very interesting moves and counter-moves of the British commander General Edward Pakenham, brother in law of the Duke of Wellington and a peninsular war veteran, and Jackson. Suffice it to say that at the Battle of New Orleans on January 8, 1815, Jackson and his men, heavily out-numbered, handed the British the most lopsided defeat in their history, inflicting a little over 2000 casualties, including the slain General Pakenham, in exchange for 71 American casualties.


The Battle of New Orleans is sometimes called a useless battle because it was fought before news of the treaty of Ghent ending the war, which had been signed on December 24, 1814, reached America. This view is erroneous. The battle was a shot in the arm to American morale after a lack-lustre war, ensured that the British would abide by the terms of the treaty and not attempt to retain a captured New Orleans, and gave the British something to ponder on the few occasions during the nineteenth century when America and Britain again came close to war.


That a force of around 4,000, most of them relatively untrained militia, could hand a British army of 11,000 well-trained veteran regulars such a defeat has long been thought to be a military miracle. Perhaps the term “miracle” is the correct one to use. The night before the battle, at the Ursuline Chapel in the Ursuline Convent in New Orleans, the nuns, joined by many of the faithful in New Orleans, prayed throughout the night for an American victory.

On the morning of January 8, 1815, Mass was said at the altar on which a statue of Our Lady of Succor had been placed. The Prioress of the Convent, Mother Marie Olivier de Vezin made a vow to have an annual Mass of Thanksgiving said if victory was granted to the Americans. At the moment of communion, a courier ran into the chapel announcing the American victory. After the battle Old Hickory came to the convent to thank the nuns for their prayers. “By the blessing of heaven, directing the valor of the troops under my command, one of the most brilliant victories in the annals of war was obtained.” In after years, whenever Jackson visited New Orleans, he always made a point of also visiting the Ursuline Covent. The Mass of Thanksgiving has been faithfully observed each year since 1815 by the Ursulines. 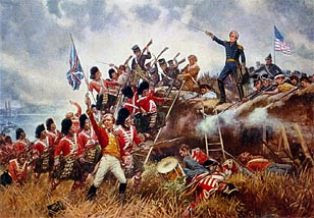