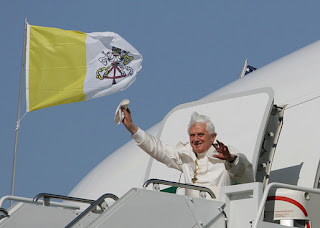 The following comes from the NCRegister.com:


Pope Benedict XVI has arrived in the Croatian capital Zagreb at the beginning of a two day visit to the country - the Holy Father’s 19th foreign visit.


In his arrival speech, the Pope denounced the individualism taking hold in Europe. “In the face of the challenges posed by today’s culture – marked as it is by social differentiation and instability, and by an individualism that gives rise to a vision of life without obligations and a constant search for “private space” – there is a need for convinced witness and active dynamism aimed at promoting the fundamental moral values that underpin social living and the identity of the old Continent,” the Pope said.


The Pope is expected to focus on the importance of the family during his weekend visit, the full programme for which can be found here.


In his customary press conference with journalists on the the papal plane, the Pope gave strong backing to Croatia’s bid to join the European Union. The Balkan country is to find out later this month if years of negotiations to join the EU have been successful. Benedict XVI has long been a supporter of Croatia’s entry into the economic and political bloc.  The Holy See is counting on Croatia, once it is an EU member, to emphasize Europe’s Christian roots in the face of the continent’s creeping secularism.


Below is the full text of Benedict XVI’s discourse at the welcoming ceremony at Zagreb’s international Pleso Airport, Croatia, at the start of his apostolic journey to the country.

Mr President,
Dear Brother Bishops,
Distinguished Authorities,
Dear Brothers and Sisters,
It gives me great joy to come among you as a pilgrim in the name of Jesus Christ. I offer my most cordial greetings to the beloved land of Croatia, and as Saint Peter’s Successor I warmly embrace all its inhabitants. In particular, I greet the Catholic community: the Bishops, priests, men and women religious, and the lay faithful, especially the families of this land where the preaching of the Gospel has borne fruit, bringing hope of life and salvation for all. I extend a respectful greeting to you, Mr President, and to the other civil and military Authorities gathered here. I thank you, Mr President, for the kind words you have addressed to me and I offer you my best wishes for the high office entrusted to you, and for the peace and prosperity of the whole Nation.


At this time, my thoughts go back to the three pastoral visits to Croatia made by my beloved predecessor, Blessed John Paul II, and I thank the Lord for the long history of faithfulness that links your country to the Holy See. For over thirteen centuries, those strong and special bonds have been put to the test and strengthened in circumstances that were sometimes difficult and painful. This history is an eloquent testimony to your people’s love for the Gospel and the Church. From its earliest days, your Nation has formed part of Europe, and has contributed, in its unique way, to the spiritual and moral values that for centuries have shaped the daily lives and the personal and national identity of Europe’s sons and daughters. In the face of the challenges posed by today’s culture – marked as it is by social differentiation and instability, and by an individualism that gives rise to a vision of life without obligations and a constant search for “private space” – there is a need for convinced witness and active dynamism aimed at promoting the fundamental moral values that underpin social living and the identity of the old Continent. Twenty years after the declaration of independence and on the eve of Croatia’s full integration into the European Union, this country’s remote and recent history can stimulate reflection on the part of all the other peoples of the Continent, helping them, individually and collectively, to preserve and to inject new life into that priceless common heritage of human and Christian values. So may this beloved Nation, in the strength of its rich tradition, help to steer the European Union towards a fuller appreciation of those spiritual and cultural treasures.Dear Brothers and Sisters, with the motto “Together in Christ”, I have come to join you in celebrating the First National Day of Croatian Catholic Families. May this important event serve as an opportunity for proposing afresh the values of family life and the common good, for strengthening unity, renewing hope and leading people to communion with God, the foundation of fraternal sharing and social solidarity. In anticipation, I sincerely thank all those who have helped with the preparation and organization of my visit. In view of the challenges confronting the Church and civil society today, I invoke upon this land and all its inhabitants the intercession and assistance of Blessed Alojzije Stepinac, the beloved and venerable Shepherd of your people. May he accompany the young generations as they strive to live by that charity which prompted the Lord Jesus Christ to give his life for all people. May Saint Joseph, watchful guardian of the Redeemer and heavenly Patron of your Nation, together with the Virgin Mary, “Fidelissima Advocata Croatiae”, obtain for you peace and salvation, today and always. Thank you!