Saint of the day: Justin Martyr 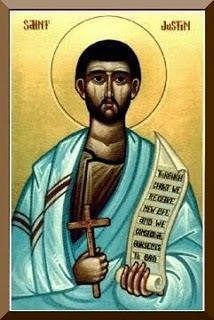 On June 1, one day before 2011's celebration of the Ascension of Christ, the Catholic Church will honor the memory of the early Christian philosopher St. Justin Martyr.

Justin was born around the year 100 in the Palestinian province of Samaria, the son of Greek-speaking parents whose ancestors were sent as colonists to that area of the Roman Empire. Justin's father followed the Greek pagan religion and raised his son to do the same, but he also provided Justin with an excellent education in literature and history.

As a young man, Justin became interested in philosophy and looked for truth in the various schools of thought that had spread throughout the empire. But he became frustrated with the professional philosophers' intellectual conceits and limitations, as well as their apparent indifference to God.

After several years of study, Justin had a life-changing encounter with an old man who urged him to study the Jewish prophets. He told Justin that these authors had not only spoken by God's inspiration, but also predicted the coming of Christ and the foundation of his Church.

“Above all things, pray that the gates of life may be opened to you,” the old man told Justin, “for these are not things to be discerned, unless God and Christ grant to a man the knowledge of them.” The aspiring philosopher began to take the claims of the Christians more seriously, and he eventually decided to be baptized around age 30.

After his conversion, Justin continued to wear the type of cloak that Greek culture associated with the philosophers. Inspired by the dedicated example of other Catholics whom he had seen put to death for their faith, he embraced a simple and austere lifestyle even after moving to Rome.

Justin was most likely ordained a deacon, since he preached, did not marry, and gave religious instruction in his home. He is best known as the author of early apologetic works which argued for the Catholic faith against the claims of Jews, pagans, and non-Christian philosophers.

Several of these works were written to Roman officials, for the purpose of refuting lies that had been told about the Church. Justin sought to convince the rulers of the Roman Empire that they had nothing to gain, and much to lose, by persecuting the Christians.

In order to fulfill this task, Justin gave explicit written descriptions of the early Church's beliefs and its mode of worship. In modern times, scholars have noted that Justin's descriptions correspond to the traditions of the Catholic Church on every essential point.

Justin describes the weekly Sunday liturgy as a sacrifice, and speaks of the Eucharist as the true body and blood of Christ. He further states that only baptized persons who believe the Church's teachings, and are free of serious sin, may receive it.

Justin also explains in his writings that the Church regards celibacy as a sacred calling, condemns the common practice of killing infants, and looks down on the accumulation of excessive wealth and property.

His first defense of the faith, written to Emperor Antonius Pius around 150, convinced that emperor to regard the Church with tolerance. In 167, however, persecution began again under Emperor Marcus Aurelius.

During that year Justin wrote to the emperor, who was himself a philosopher and the author of the well-known “Meditations.” He tried to demonstrate the injustice of the persecutions, and the superiority of the Catholic faith over Greek philosophy. Justin emphasized the strength of his convictions by stating that he expected to be put to death for expressing them

He was, indeed, seized along with a group of other believers, and brought before Rusticus, prefect of Rome. A surviving eyewitness account shows how Justin the philosopher became known as “St. Justin Martyr.”

The prefect made it clear how Justin might save his life: “Obey the gods, and comply with the edicts of the emperors.” Justin responded that “no one can be justly blamed or condemned for obeying the commands of our Savior Jesus Christ.”

Rusticus briefly questioned Justin and his companions regarding their beliefs about Christ and their manner of worshiping God. Then he laid down the law.

“Hear me,” he said, “you who are noted for your eloquence, who think that you make a profession of the right philosophy. If I cause you to be scourged from head to foot, do you think you shall go to heaven?”

“If I suffer what you mention,” Justin replied, “I hope to receive the reward which those have already received, who have obeyed the precepts of Jesus Christ.”

“There is nothing which we more earnestly desire, than to endure torments for the sake of our Lord Jesus Christ,” he explained. “We are Christians, and will never sacrifice to idols.” Justin was scourged and beheaded along with six companions who joined him in his confession of faith.

St. Justin Martyr has been regarded as a saint since the earliest centuries of the Church. Eastern Catholics and Eastern Orthodox Christians also celebrate his feast day on June 1.
Posted by Padre Steve at 5:00 AM