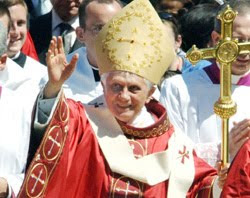 “Thanks to the Lord for the friendship that he has bestowed upon me,” Pope Benedict said to a packed St. Peter’s Basilica as he celebrated his 60th anniversary of becoming a priest, a day that is also the Feast of Saints Peter and Paul.

“Thanks to the people who have formed and accompanied me. And all this includes the prayer that the Lord will one day welcome us in his goodness and invite us to contemplate his joy,” the Pope said.

Pope Benedict was ordained to the priesthood, along with his brother Georg, in the Bavarian town of Freising on June 29, 1951. Georg is with him in Rome today.

Appropriately, the music throughout today’s ceremonies seemed to have a distinctly Germanic feel, with pieces by Mozart, Bach and Handel included.

In his homily, the Pope repeatedly drew upon the words of Christ that were quoted to him by the bishop ordaining him 60 years ago: “I no longer call you servants, but friends.”

“Sixty years on from the day of my priestly ordination, I hear once again deep within me these words of Jesus that were addressed to us new priests at the end of the ordination ceremony by the Archbishop, Cardinal Faulhaber, in his slightly frail yet firm voice.”

“At that moment I knew deep down that these words were no mere formality, nor were they simply a quotation from Scripture. I knew that, at that moment, the Lord himself was speaking to me in a very personal way.”

At today’s Mass, Pope Benedict was wearing red vestments in remembrance of Saints Peter and Paul shedding their blood when they were martyred in Rome during the 1st century. He said that the life of the Christian – and particularly the life of the priest - is one that grows through joys and hardship. He drew upon another analogy of Christ’s – the vine and the branches – noting that for grapes to ripen and produce good wine “sun is needed, but so too is rain, by day and by night.”

“Is this not already an image of human life, and especially of our lives as priests?” asked the Pope as he looked back on his own experiences over the past 60 years.

“We need both sun and rain, festivity and adversity, times of purification and testing, as well as times of joyful journeying with the Gospel.”

“In hindsight,” he said, “we can thank God for both: for the challenges and the joys, for the dark times and the glad times. In both, we can recognize the constant presence of his love, which unfailingly supports and sustains us.”

The Pope said it is a close friendship with Christ that sustains the Christian – priests included – during such moments of darkness.

“What is friendship?” Benedict XVI asked, answering with an ancient Latin maxim.

The Pope then gave advice as to how to deepen that friendship with Jesus.

“The friendship that he bestows upon me can only mean that I too try to know him better; that in the Scriptures, in the Sacraments, in prayer, in the communion of saints, in the people who come to me, sent by him, I try to come to know the Lord himself more and more.”

Today’s papal ceremonies at St. Peter’s also included the bestowal of the pallium upon 41 new metropolitan archbishops from around the world.

The pallium is a white woolen liturgical vestment emblazoned with six black crosses. It symbolizes an archbishop’s pastoral authority and his unity the Pope.

At the end of the Mass the Pope processed out to the applause of the congregation and the strains of the Hallelujah Chorus from Handel’s Messiah.