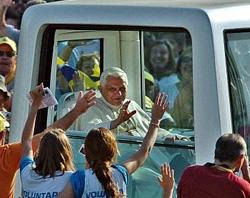 “If you are rooted in Christ, you will fully become the person you are meant to be,” the Pope told over 50,000 youngsters at a prayer vigil in Zagreb’s Ban Josip Jalacic Square.

Pope Benedict also challenged the young people. “The Lord Jesus is not a Teacher who deceives his disciples: he tells us clearly that walking by his side calls for commitment and personal sacrifice, but it is worth the effort!”

The Pope was greeted in rock star like fashion by crowds waving both Croatian and Vatican flags. Very noticeable among the crowd were scores of young priests and nuns.

Although the event often had the feel of a rally, it was also interspersed with periods of silent prayer. It included personal testimonies, Scripture readings and a musical accompaniment which ranged from the traditional Croat to contemporary hymns.

“This time of youth is given to you by the Lord to enable you to discover life’s meaning!” said the Pope as he asked the young people the same question that Jesus Christ asked the youngest of his apostles, John, when he first met him: “What are you looking for?”

“Young friends, these words, this question reaches beyond time and space ... Jesus speaks to you today, through the Gospel and his Holy Spirit. He is your contemporary! He seeks you even before you seek him!”

The Pope said that while Jesus Christ was fully respects their freedom, he offers himself to young people as “the authentic and decisive response” to “the longing deep within your hearts, to your desire for a life worth living.”

“Let him take you by the hand! Let him become more and more your friend and companion along life’s journey. Put your trust in him and he will never disappoint you!” he urged.

The Pope told them that this was the only way to find true happiness “even amid difficulties, trials and disappointments” and “even when it means swimming against the tide.”

He concluded by holding up the example of Blessed Ivan Merz, an early 20th century Bosnian-Croat layman and academic. Merz was the creator of Christian movement for young people called “The Croatian Union of Eagles.” He died in 1928, aged only 32, but had lived a life of such heroic sanctity that he was beatified by Pope John Paul II in 2003. “This young life, completely given over to love, bears the fragrance of Christ,” said Pope Benedict.

The Pope then accepted enthusiastic cheers of “Benedikt! Benedikt! Benedikt!” from the youthful crowd for a few moments before imparting his apostolic blessing and departing for the evening. Tomorrow morning he’ll celebrate Mass for more than 300,000 pilgrims at Croatia’s National Family Day in Zagreb. The Pope’s visit will conclude tomorrow evening.
Posted by Padre Steve at 10:54 AM