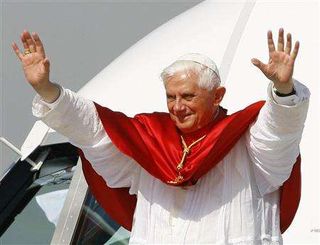 Pope Benedict stressed the urgency of evangelizing modern society, saying that Christians today face the task of reaching a world that grows increasingly apathetic to the message of the Gospel.

“The crisis we are living through,” he said, “carries with it signs of the exclusion of God from people's lives, a general indifference to the Christian faith, and even the intention of marginalizing it from public life.”

The Pope made his remarks on May 30 to members of the Pontifical Council for Promoting New Evangelization, as they prepare for their upcoming synod in 2012. During the meeting, which will take place Oct. 7-28 next year, bishops and other participants from around the world will discuss the late Pope John Paul II's vision of proposing the Christian faith in new ways.

Pope Benedict explained that “the term 'new evangelization' recalls the need of a new way of evangelizing, especially for those who live in a situation like today's where the development of secularization has left deep marks on even traditionally Christian countries.”

He noted that “proclaiming Jesus Christ, the sole Savior of the world, is more complex today than in the past, but our task continues to be the same as at the beginning of our history. The mission hasn't changed, just as the enthusiasm and courage that motivated the apostles and first disciples should not change.”

The Church's message, he said, “needs to be renewed today in order to convince modern persons, who are often distracted and insensitive. That is why the new evangelization must find the ways to make the proclamation of salvation more effective, the salvation without with life is contradictory and lacking in what is essential.”

Pope Benedict observed a growing “phenomenon” of people in modern society “who wish to belong to the Church but who are strongly determined by a vision of life that is opposed to the faith is often seen.”

“It is important to make them understand that being Christian is not a type of outfit that one wears in private or on special occasions, but something living and totalizing, capable of taking all that is good in modernity.”

He emphasized that the entire Christian community “is called to revive the missionary spirit in order to offer the new message that persons of our times are hoping for.”

The “lifestyle of believers needs real credibility, as much more convincing as the more dramatic is the condition of the persons to whom it is addressed.”

Pope Benedict expressed his desire to council members that they outline “a plan to help the entire Church and the particular different Churches in the commitment of the new evangelization; a plan whereby the urgency of a renewed evangelization takes charge of formation, particularly that of the new generations, and is united to the proposal of concrete signs capable of making the Church's response in this particular moment clear.”
Posted by Padre Steve at 10:05 AM