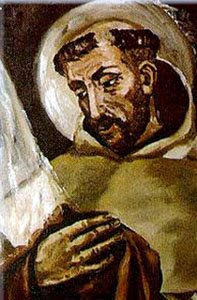 We remember today the great Carmelite Saint Simon Stock! We don't know too much of his early life. However, legend says that at the age of 12 he began to live as a hermit in a hollow oak tree. The name Stock is thought to have come from the old English work for tree trunk. Simon became an itinerant preacher and a pilgrim to the Holy Lands. He left the Holy Land when invading Muslims chased out the Christians. Simon then joined the Carmelite Order soon after its arrival in England.

He lived and studied for several years in Rome and Mount Carmel. Simon was elected sixth general of the Carmelites in 1247 when he was 82 years old. He helped the order spread through England, southern and western Europe. He founded houses in Cambridge, England in 1248, Oxford in 1253, Paris in 1260, and Bologna in 1260. St. Simon revised the Rule of the Order to make them mendicant friars rather than hermits.

Despite these successes, the Order was oppressed on all sides, including by the clergy and other orders. The friars took their woes to their patroness, the Virgin Mary. According to tradition, the Blessed Virgin appeared to Simon bringing him the brown scapular of the Carmelites. "This shall be the privilege for you and for all the Carmelites," she told him, "that anyone dying in this habit shall be saved." On 13 January 1252 the Order received a letter of protection from Pope Innocent IV, protecting them from harassment. Let's pray that we might have the same devotion to the Blessed Virgin Mary as St. Simon! St. Simon Stock, pray for us!
Posted by Padre Steve at 5:00 AM

Do you know of St. Luigi Orione? He was a student of Don Bosco. His feast was the other day. Just thought I would mention it. He and St. John of the Cross are my two main patrons.

Jason, thanks for the reminder about St. Luigi Orione! The Orione Fathers do a beautiful work there in Boston for the elderly. Take care and God bless! Padre Steve

Thank You Padre Steve.
I have worn Our Lady's Brown Scapular for the last 53 years.
She has always protected me.