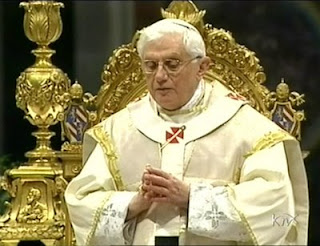 Local dioceses should give a “generous welcome” to any laity who wish to attend Mass in the “extraordinary form” and to priests who wish to say it.

That’s the key message of new Vatican guidelines regarding the extraordinary form of the Mass – often popularly referred to as the “Tridentine Mass” or “old Latin Mass.”

The “extraordinary form” is the rite of Mass contained within the Roman Missal which was universally used from 1570 to 1962. It was almost always celebrated in Latin.

The “ordinary form”, on the other hand, is the newer rite of the Mass approved for use by Pope Paul VI in 1969. This Mass is most often said in parishes around the world.

Today’s guidelines were issued to clarify various questions from around the world about the Pope Benedict's 2007 document “Summorum Pontificum.”

In it Pope Benedict said that any priest wishing to say the older form of the Mass was no longer required to seek the permission of his bishop.

Questions arose, however, as to how aspects of the document should be interpreted. Hence the May 13 clarification produced by the Vatican body responsible for such matters, the Pontifical Commission Ecclesia Dei. They state:

1. The two forms of the Roman rite are not in competition with each other but, instead, are complementary, “one alongside the other.”

2. The older rite of the Mass is a “precious treasure to be preserved” with “appropriate honor.”

3. Bishops and priests should give a “generous welcome” motivated by “pastoral zeal” to any groups of Catholics who ask for the older rite to be offered.

4. Such groups can be of any size and can also be from one parish, various parishes or even different dioceses.

5. Those preparing for the priesthood should be given training in the “extraordinary form” in seminary.

6. If a diocese doesn’t have the necessary expertise to undertake such training they should ask the Ecclesia Dei commission for assistance.

7. Every priest who is not impeded by Canon Law is to be considered “qualified” for the celebration of the “extraordinary form.”

8. A priest need only have a “basic knowledge” of Latin so as to be able to “pronounce the words correctly and understand their meaning.”

9. The court of appeal over the interpretation of “Summorum Pontificum” is the Ecclesia Dei commission in Rome.

10. “Summorum Pontificum” wishes to heal the rift between the Catholic Church and those who have left the Church over the liturgical reforms which followed the Second Vatican Council.

Finally, the authority of today’s document is underlined by the fact that it was personally endorsed by Pope Benedict XVI last month. Indeed in today’s document “Summorum Pontificum” is described as an “important expression of the Magisterium of the Roman Pontiff.”
Posted by Padre Steve at 1:18 PM