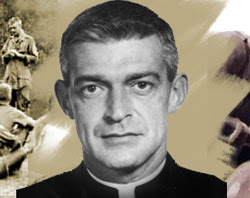 Servant of God Fr. Vincent Capodanno, a chaplain who was killed in action while protecting U.S. soldiers during the Vietnam War, was honored with a permanent tribute at the National Museum of the Marine Corps.

“The Marines who served with Chaplain Capodanno remember him as the Chaplain who went wherever his Marines needed his comfort and guidance, no matter the personal danger,” said Lt. Gen. Ron Christmas, president of the Marine Corps Heritage Foundation.

“From the foxholes to the front lines, Chaplain Capodanno was there.”

The private ceremony in Triangle, Virginia remembered Chaplain Capodanno for his support of Marines in combat and his recognition as the only chaplain to receive the Medal of Honor for service in the corps.

Foundation members said they established the permanent tribute in Chaplain Capodanno's name in “recognition of his dedicated service to Marines and the ultimate sacrifice he made in Vietnam, in an effort to save a Marine's life.”

Fr. Capodanno was born on Staten Island in New York City to Italian immigrant parents. In 1957 he was ordained a Catholic priest by Cardinal Francis Spellman, then vicar of the U.S. Military Ordinariate.

He entered the Maryknoll religious order and served as a missionary in Taiwan and Hong Kong from 1958 to 1965. Having successfully petitioned his Maryknoll superiors to release him to serve as a U.S. Navy chaplain, he arrived in Vietnam during Holy Week of 1966.

Holding the rank of Lieutenant, Fr. Capodanno participated in seven combat operations. He became known for putting the well-being of Marines above his personal safety, moving among those wounded and dying on the battlefield in order to provide medical aid, comfort, and Last Rites.

During Operation Swift on September 4, 1967, Fr. Capodanno was injured by an exploding mortar round which caused multiple injuries on his arms and legs and severed part of his right hand.

Fred Smith, head of FedEx Corporation, who served with Fr. Capodanno, recalled during the May 11 ceremony how the chaplain nearly lost his hand to shrapnel as he tended to the wounded, but refused care so that medical supplies could go to his injured Marines.

The priest directed Marines to help the wounded and continued to move about the battlefield, encouraging them with his words and example.

As he sought to administer aid to one particular marine, he placed his own body between the wounded man and an enemy machine gunner and was killed.

In 2006, the Catholic Church declared Fr. Capodanno a Servant of God, which is the first step towards being officially recognized as a saint.
Posted by Padre Steve at 10:42 AM