Pope Benedict: proclaiming Jesus Christ is the task of the Church 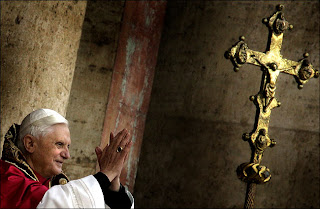 Proclaiming Jesus Christ as “the way, the truth and the life” is the main task of the Church, Pope Benedict said in his Sunday Regina Coeli remarks.

“The New Testament put an end to invisibility of the Father. God showed his face, as confirmed by the response of Jesus to the Apostle Philip, ‘Whoever has seen me has seen the Father’,” the Pope told the faithful in St. Peter’s Square on May 22.

For Christians, he explained, “the way to the Father is to be guided by Jesus, by his word of truth, and in accepting the gift of his life.”

Pope Benedict suggested the way of Jesus Christ is to be found in “following him every day, in simple actions that make up our day.”

He then quoted his own words from the second volume of his book Jesus of Nazareth:

“That's the mystery of God: to act in the quietest way. He only builds slowly in the great story of mankind’s history. He becomes a man, but in order to be ignored by his contemporaries and influential forces in history ... He continually knocks in the quietest way on the doors of our hearts, and if we open ourselves to him, he slowly makes us able to ‘see’.”

Pope Benedict drew upon the gospel reading for today, the fifth Sunday of Easter, in which Jesus Christ tells his disciples “Have faith in God, believe also in me.” The Pope pointed out that this belief is a single act of faith, and not two separate actions.

He cited the counsel of the 13th-century Italian theologian St. Bonaventure, who said “Open your eyes, therefore, tend the spiritual ears, open your lips and you have your heart, that you can in all creatures see, hear, praise, love, worship, glorify, honor your God.”

Pope Benedict concluded by calling upon the Virgin Mary to “always help the pastors and those in the various ministries announced the good news of salvation, so that the Word of God will spread and multiply the number of disciples.”

He then led pilgrims in the singing of the Regina Coeli.
Posted by Padre Steve at 9:43 AM