Beatification of JPII: Most Crowded Ever! 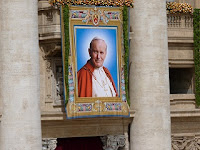 
More than 1 million pilgrims participated in the most crowded beatification in history today in Rome.
A huge round of applause rose up from St. Peter’s Square, passing along the Via della Conciliazione and side streets to the Circus Maximus -- where thousands of people followed the celebration on video screens -- when Benedict XVI read the formula of beatification.
“We grant that the venerable Servant of God John Paul II, Pope, henceforth be called Blessed and that his feast may be celebrated in the places and according to the regulations established by law, every year on Oct. 22,” he read in Latin.
A smiling portrait of Karol Wojtyla, from a 1995 photograph, was uncovered at that moment on a large banner that hung from the main loggia of St. Peter’s Basilica. The pilgrims, many from Poland, were unable to hold back their tears.
The French nun Marie Simon-Pierre, whose inexplicable healing from Parkinson’s disease made it possible to conclude the beatification process, along with Sister Tobiana, the Polish nun who assisted John Paul II’s physician, carried in procession a relic of Karol Wojtyla, a cruet of his blood.
Security opened St. Peter’s Square at 2 a.m., a few hours before the scheduled time of 5:30, in anticipation of the overwhelming numbers.
The “powerful” of the world were also present: 62 delegations led by heads of state and government as well as royal families, besides the other countries officially represented.
Representing Italy were President Giorgio Napolitano and Prime Minister Silvio Berlusconi; representing Poland was President Bronislaw Komorowski; José Manuel Durão represented the European Commission.
Representing Israel was Yossi Peled, a member of the Knesset, who was saved during the Holocaust by a Belgian Catholic family.
Prior to the celebration Peled remarked that the event was “especially significant.” John Paul II, he said, “was born in a period in which one breathed an atmosphere of publicly approved anti-Semitism” but “he rebelled and challenged those who wanted to enslave the human race.”
Mexico was represented by President Felipe Calderón and Honduras by Porfirio Lobo.
Five royal houses were present: those of Spain, Belgium, Luxembourg, Lichtenstein and the United Kingdom.
The United States was represented by its ambassador to the Holy See, Miguel Díaz; Cuba by Caridad Diego Bello, head of the Office for Religious Questions of the Central Committee of the Party; and France by Prime Minister François Fillon.
Some 2,300 journalists were present and 1,300 televisions stations.
Posted by Padre Steve at 10:42 AM