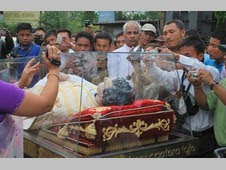 The following comes from the UCA News site:

The relics of St John Bosco, which reached Nagaland on May 4, are said to have have left a trail of alleged miracles in Kohima.

Professor of English Literature at Kohima University Salesian Father A.J. Sebastian, who has been a diabetic patient for some 15 years, claims to have experienced healing during a prayer vigil with the relics at Christ the King Parish on May 5.

“I feel completely normal these days,” he said, although he continues to check his blood sugar level.

“People are reporting extraordinary happenings they captured on mobile phone cameras during the relics veneration after the solemn Eucharist at the Christ the King Parish,” said assistant parish priest Father Job Kallarackal.

In one photo taken by a local boy, the apparent figure of a lady in a blue dress can be seen in the sanctuary watching over the relics, although veteran missionary Father Kallarackal points out that no-one is allowed into the sanctuary.

Almost at the same time another boy taking photos from a different angle apparently captured the same image of the lady in blue in the sanctuary.

Another photo taken by a Jesus Youth boy shows something like a Jesus face on the wall across the relic casket.

Fr Kunnathettu claimed the photos had not been manipulated. “I got the pictures from the mobile [which shot it].”

In another photo, Don Bosco’s hand appears to be raised in blessing, even though they remain joined and resting on his chest. Shot by a Bethany Sister of Christ King Parish, the photo when printed did not show raised hand even though witnesses said they saw it on the phone screen.

On May 8 there were extensive discussions and study of the photos, then yesterday they were shown to the Vicar General (Kohima diocese does not have a bishop for over a year). He took time to study and gave rational interpretations and came to the conclusion, “let it go, if it can increase people’s faith.”

“People were emotionally and spiritually moved with the relics pilgrimage. We had prepared the people through catechetical instruction on the meaning of relics and its significance in Christian life,” said Father Kallarackal, explaining the high degree of receptivity and devotion among the people.

Meanwhile, on May 6, after a morning Eucharist at Christ King Church Kohima Village, the relics left for Savio Home, Zubza and later for Wokha (Nagaland). From there the relics proceeded to Don Bosco Amguri in the Sibsagar district of Assam. En route, at the insistence of the parish priest of Woka, , Father Caesar Henry, there was a stopover for the relics.

During the brief stay at the diocesan parish, the charismatic preacher organized a solemn Eucharistic celebration, followed by a healing service. More than 6,000 mostly local adivasi people (also non-Catholic) joined the event.

Father Caesar Henry said: “It is true that some people were healed of their sickness but the authenticity is yet to be confirmed. But the greater miracle is that, before [the relics arrived, my] parish had little progress. After the relics visit, the faith of the people is revived.”