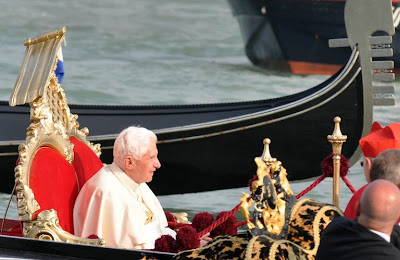 After traveling through Venice's waterways in a gondola, Pope Benedict urged citizens gathered in the city's main square to cultivate a society rooted in the “firm foundations of the Gospel.”

“Venice is called to assume important responsibilities in promoting a culture of welcome and sharing,” the Pope said, urging them to build “a culture of harmony and love that has its firm foundations in the Gospel.”

Pope Benedict's May 7 address in St. Mark's Square came during his two-day visit to Venice over the weekend. It was his first papal trip to the historic Italian city famously built upon a series of canals. The pontiff traveled on the same gondola used by Pope John Paul II in 1985 during the last papal visit to the city.

The Pope highlighted the “openness that has always characterized Venice” during his remarks to citizens and government officials. He praised the city for being “a crossroads of peoples and of communities of every provenance, culture, language, and religion.”

The pastoral visit launched on May 7 with a visit to the historic port town of Aquileia where he was met by thousands of enthusiastic Venetians.

The highlight of his 27-hour-trip came when Pope Benedict celebrated Mass before an estimated congregation of 300,000 on May 8. At the San Giuliano de Mestre Park, the Pope urged the massive crowds to give hope to modern man by “listening to and loving the Word of God.”

After greeting the 30 assembly members, Pope Benedict traveled by boat to the Basilica of Our Lady of Good Health.

There he met with representatives from the worlds of business, politics and culture at the official opening of a new cultural center founded by Cardinal Angelo Scola of Venice.

“Venice has a long history and a rich human, spiritual, and artistic patrimony to also be able to offer today a precious contribution for helping persons to envision a better future and to work toward it,” he told those gathered.

The Pope referenced the city's patron, St. Mark the Evangelist, who used Venice as a first-century base for his mission to preach the gospel to surrounding nations.

Venice “should not be afraid of another emblematic element contained in the shield of St. Mark: the Gospel,” he underscored. “The Gospel is the greatest strength of transformation in the world, but it is neither a utopia nor an ideology.”

The Pope concluded his visit by greeting Venice's Jewish and Muslim communities and blessing the recently restored Chapel of the Most Holy Trinity. He also inaugurated the city's Studium Generale Marcianum Library.

The visit is the third by a Pope to Venice in the past 40 years.
Posted by Padre Steve at 2:55 PM