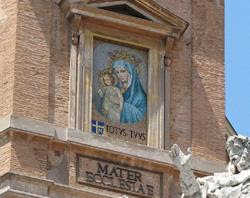 Blessed Pope John Paul II was born on May 18, 1920. Today, one of his closest colleagues revealed the true story behind the mosaic of Our Lady the late Pope had installed in St. Peter’s Square.

“After the assassination attempt on May 13, 1981, Vatican officials were evaluating the possibility of placing a plaque, or some visible sign, in St. Peter’s Square in the area where the Pope had been shot, in remembrance of a painful page in the history of the Church but also as testimony of divine protection,” Cardinal Giovanni Battista Re wrote in the May 18 edition of the Vatican newspaper, L’Osservatore Romano.

Cardinal Re was a senior figure in the Congregation for Bishops and the Vatican Secretariat of State during the pontificate of Pope John Paul.

“John Paul II, convinced that the Virgin Mary had protected him on that day, immediately expressed the desire that an image of the Madonna be placed in the square.” Cardinal Re added that Pope John Paul had also become aware that there was something “missing” from the St. Peter’s Square up until that time – an image of Our Lady.

So in the summer of 1981, then-Bishop Re was asked to join a small group charged with devising solutions. Their deliberations didn’t take long.

“Two hours later, we were standing in St. Peter’s Square and Monsignor Fallani (who was in charge of conservation in the Vatican) pointed to a window of the Apostolic Palace where the mosaic is now placed and said, ‘For me, a solution which works well for the setting of this square is a mosaic placed in the travertine frame of that window up there.’ He then asked what was behind that particular window.”

Cardinal Re said he explained that it was the room “where two sisters did some typing for the Secretariat of State, but that it was a large room and had another side window.”

So the group had decided upon a location and the use of a mosaic, but which image of Our Lady to use?

“Once again, the Pope offered his opinion that he would like a representation of Mary as Mother of the Church, because, he explained, ‘the Mother of God has always been united with the Church and has been particularly close during difficult moments in its history.’ He added that he was personally convinced that the Virgin Mary was in St. Peter’s Square on May 13, to save the life of the Pope,” Cardinal Re wrote.


The exact image was taken from an ancient painting of the Madonna and child that had a long history. It was housed in the old St. Peter’s Basilica, built in the 4th century by the Emperor Constantine, and then later in the present St. Peter’s, built in the 16th century under the guidance of Michelangelo. Finally, in 1964, the image was restored and renamed “Mater Ecclesiae” to mark the Second Vatican Council’s proclamation of Mary as “Mother of the Church,” Cardinal Re explained.

“On December 8th, 1981, John Paul II, before the recitation of the Angelus, blessed the Marian image, a sign of heavenly protection on the Pontiff, on the Church and on all who come to St. Peter’s Square.”