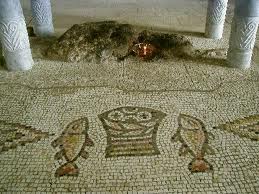 The Benedictine monks who oversee the site where Jesus miraculously fed thousands are building a new monastery to replace their earthquake-damaged building.

Fr. Jeremias Marseille, OSB, a member of the German Benedictine community living there, said that their present house, built without proper foundations in the 1950s, is not safe.

“The rooms have all cracks of 45 degrees in the walls and the house is moving, as we live in an area of earthquakes at the beginning of the Jordan valley,” he told Aid to the Church in Need.

The second “more important” reason for the move is that the community needs a cloister “where the monastic life can increase and grow.”

They experience a high volume of pilgrims and tourists each day, sometimes as many as 5,000 people. The monks need a place of retreat and reflection and also a place to provide a meeting place for the young people they serve: disabled youth from Israel and the West Bank.

It is important to withdraw to a quiet place and seek God, Fr. Jeremias explained, and the new monastery will provide this in its new oratory.

The monk cited Jesus’ words before the multiplication of loaves and fish: “Come away to some lonely place all by yourselves and rest for a while, for there were so many coming and going.”

Aid to the Church in Need is supporting the project, giving more than $70,000 to build the oratory.

The oratory will be air conditioned, an essential feature in an area where temperatures can reach 122 degrees Farenheit during the hottest part of the day.

“Monks and guests need a room where, both day and night, they can find a quiet place to pray which is set apart from the crowds in the surroundings,” Fr. Jeremias said.

The new building will also be able to withstand the periodic earthquakes.

Construction on the monastery’s cells is almost finished. Builders will soon begin its west wing, which includes the new monastery.

“We hope and plan to finish the skeleton construction work of the whole monastery in October, and we hope to move in at the end of May next year,” Fr. Jeremias said.

The monks oversee the Church of the Multiplications of Loaves and Fish, which was built in 1982 by the German Association of the Holy Land on the site of a Byzantine church destroyed in 614 A.D. by the Persians. The current structure incorporates the remains of the mosaic floor of the fifth century church.

Records of a church at the site date back to the end of the fourth century. A small Syrian church was built over a holy stone which became an altar commemorating Jesus’ miracle.
Posted by Padre Steve at 11:18 AM