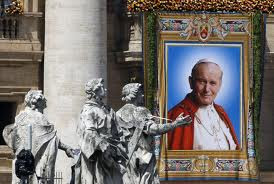 “This is the photo of my life.” The words of photographer Grzegorz Galazka as he gazes onto the giant image of Blessed John Paul II now draped over the balcony of St Peter’s Basilica.

“I don't know how my photo was chosen but as you can see they liked it.”

The image was unveiled to the cheers of over a million pilgrims during Sunday’s beatification ceremony. Galazka had been the official photographer to Pope John Paul on almost all of his travels from 1985 until his death in 2005.

Little could Grzegorz have guessed that this photograph would be one day be adopted as the official image of a potential saint. But when he heard that those behind Pope John Paul’s cause of beatification were looking for a portrait to use in their publications, such as the magazine ‘Totus Tuus,’ he quickly realized that he had just the photo.

“I proposed it three or four times. As I work with Totus Tuus Magazine, they appreciated my work. In the end, when the moment arrived they chose my photo to be there at the beatification.”

The photograph depicts an engaging, smiling Blessed John Paul attired in white papal soutane and red cloak. So what was the man in the photograph really like?

“Well, I'm a photographer,” says Grzegorz, “so I saw him closely but always down the lens. I saw him in his happiness and in his concern. I actually got to know the Pope very well through the lens of my camera.”

A native of Poland who now lives and works in Rome, Grzegorz has found the events of the past week very moving.

“I'm very happy. In the beginning, I didn't fully understand the importance of it being chosen. This is the photo of my life. I'm just happy that others can appreciate the Pope through this photo.
Posted by Padre Steve at 8:31 AM