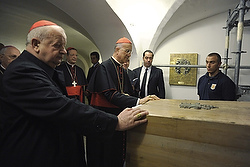 In a private ceremony that took place after St. Peter's Basilica had closed for the day, the remains of Blessed John Paul II were moved a short distance down the nave to the Chapel of St. Sebastian.

Jesuit Father Federico Lombardi revealed in a statement today that a procession accompanied the wood coffin, led by Cardinal Angelo Comastri, archpriest of the Basilica, and formed by the College of Confessors of St. Peter's Basilica, nine cardinals and several bishops and archbishops.

Monsignor Slawomir Oder, the postulator of John Paul II's cause for canonization, also attended, as did Sister Tobiana, one of the Polish nuns who looked after the Holy Father, along with several of the other nuns who also assisted the Pontiff.

After a first stop for prayer at the main altar of the basilica, where the coffin had been placed since the beatification Mass on Sunday, the procession, singing the Litany of the Saints, arrived at the Chapel of St. Sebastian.

The coffin was placed under the altar, and after the Litany of the Saints was completed, the invocation Beate Ioanna Paule was repeated three times, and the coffin was incensed.

At that time, the workers of the Fabbrica San Pietro placed a white marble slab over the coffin to enclose it in the altar. The marble was engraved with the words Beatus Ioannes Paulus PP. II.

As reported by the Vatican statement, the assembly "dispersed with joyful emotion."

The chapel is named after the main figure in the mosaic above the altar, which was completed by Pier Paolo Cristofari. Statues of Pius XI and Pius XII flank the right and left sides of the altar, respectively.