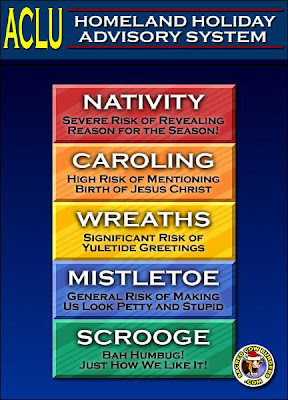 Keep CHRIST in CHRISTMAS! This is a phrase we have heard many times over the past several years. It seems for many, even those in the Church, the traditional Christmas is not inclusive enough. All of this is very tedious and silly, but the thought that we might lose so many of our rich traditions is real. We need to stop all of this and not permit the secularization of the world to influence our own celebration of the King of Kings! The story below is an illustration of the cultural battle we are in.

Martin Beckford of the Telegraph writes the following:

Enduring favourites such as Hark the Herald Angels Sing and God Rest Ye Merry, Gentlemen are being altered by clergy to make them more "modern and inclusive".

But churchgoers say there is no need to change the popular carols and complain that the result is a "festive car crash" if not everyone is singing from the same hymn sheet.

It comes just a day after a Church of England vicar banned his congregation from singing O Little Town of Bethlehem because he believed its words do not reflect the suffering endured by modern residents of Jesus's birthplace.

Another clergyman has rewritten the Twelve Days of Christmas to include Aids victims, drug addicts and hoodies.

Steve Goddard, co-editor of the Christian website Ship of Fools, which is running a competition to find the worst example of a rewritten carol, said: "It's a festive car crash.
"Half the congregation sing familiar words from memory, while the rest stumble over revised alternatives. Our readers are telling us straight – for some new versions there should be no room at the inn."

Among the "theologically-modified, politically-corrected" carols encountered by visitors to the website are Hark the Herald Angels Sing in which the line "Glory to the newborn King" has been replaced by "Glory to the Christ child, bring".

The well-known refrain of O Come All Ye Faithful – "O come let us adore Him" – has also been changed in one church to "O come in adoration", both changes apparently made for fear the original was sexist.

"[One reader] wrote in asking if the original line was considered too gender-specific," Mr Goddard said. "But as he rightly pointed out, Jesus wasn't hermaphrodite, neither was he a girl."

Churchgoers at one carol service will not be allowed to sing the words "all in white" during Once in Royal David's City in case they appear racist, while another cleric has removed the word "virgin" from God Rest Ye Merry, Gentlemen.

If you would like to read more on this please check out the Ship of Fools site. I found the graphic on top at the Xenohistorian site. The eco-santa below was found there as well! 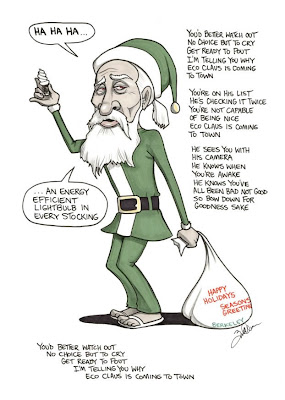