Magdi Cristiano Allam: Conversion thanks to Great Witnesses of Faith 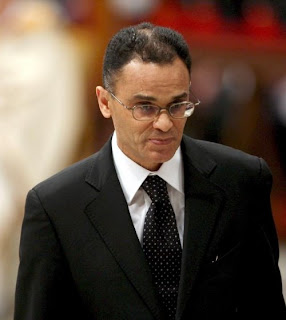 The high-profile baptism of Magdi Cristiano Allam at the Easter Vigil ceremony presided over last year by Benedict XVI has a story behind it. According to Allam himself, his conversion journey was possible because of great Christian witnesses.

One of the directors of the Milan daily Corriere della Sera, he spoke about his conversion and the experiences that led to it when he met with university students of Rome last week to tell the story of his path to Catholicism.

Starting from the Easter Vigil of 2008 -- which Allam called the "most beautiful day of my life" -- when he received baptism from Benedict XVI in St. Peter's Basilica, the Italian-Egyptian journalist spoke of his life journey and the reflections that brought him to embrace "a new life in Christ and a new spiritual itinerary."

"This journey," he recalled, "began apparently by chance, [but] in truth was providential. Since age four, I had the chance to attend Italian Catholic schools in Egypt. I was first a student of the Comboni religious missionaries, and later, starting with fifth grade, of the Salesians.

"I thus received an education that transmitted to me healthy values and I appreciated the beauty, truth, goodness and rationality of the Christian faith," in which "the person is not a means, but a starting point and an arriving point."

"Thanks to Christianity," he said, "I understood that truth is the other side of liberty: They are an indissoluble binomial. The phrase, 'The truth will make you free' is a principle that you young people should always keep in mind, especially today when, scorning the truth, freedom is relinquished."

The journalist continued: "My conversion was possible thanks to the presence of great witnesses of faith, first of all, His Holiness Benedict XVI. One who is not convinced of his own faith -- often it's because he has not found in it believable witnesses of this great gift.

"The second indissoluble binomial in Christianity is without a doubt that of faith and reason. This second element is capable of giving substance to our humanity, the sacredness of life, respect for human dignity and the freedom of religious choice."

The journalist affirmed that the Holy Father's 2006 speech in Regensburg -- which caused uproar within the Muslim community -- was for him a reason to reflect.

Allam said: "An event, before my conversion, made me think more than other events: the Pope's discourse in Regensburg. On that occasion, citing the Byzantine emperor Manuel II Paleologus, he affirmed something that the Muslims themselves have never denied: that Islam spreads the faith above all with the sword."

He added: "There is a greater and more subliminal danger than the terrorism of 'cut-throats.' It is the terrorism of the 'cut-tongues,' that is, the fear of affirming and divulging our faith and our civilization, and it brings us to auto-censorship and to deny our values, putting everything and the contrary to everything on the same plane: We think of the Shariah applied even in England.

"The one called 'a great one,' that is, to always give to the other what he wants, is exactly the opposite of the common good, perfectly indicated by Jesus: 'Love your neighbor as yourself.' That evangelical precept confirms for us that we cannot want good for the rest if we do not first love ourselves. The same is true for our civilization.

"Contrary to that principle is indifference and multiculturalism that, without any identity, pretends to give all kinds of rights to everyone. A result of multiculturalism was the imposition of social solidity and the development of ghettos and ethnic groups in perpetual conflict with indigenous populations."

The journalist recounted: "This led me to consider the third great binomial of Christian civilization: that regarding rules and values, a key for a possible ethical rescue of modern Europe. The old world, nevertheless, is a colossus of materiality with feet of clay. Materialism is a globalized phenomenon, unlike faith, which is not."

Responding to a question about a possible compatibility between faith and reason in Islam, Allam contended that "unlike Christianity, the religion of God incarnate in man," Islam is made concrete in a sacred text that, "being one with God, is not interpretable."

"The very acts of Mohammed, documented by history, and which the Muslim faithful themselves do not deny, testify to massacres and exterminations perpetrated by the prophet. Therefore, the Quran is incompatible with fundamental human rights and non-negotiable values. In the past, I tried to make myself the spokesman of an Islam moderate in itself."

Regarding interreligious dialogue between Christians and Muslims, Allam said that it is possible only "if we are authentically Christian in love, including toward Muslims. If we make dialogue relative, we will instigate our questioners to see us as infidels, and therefore as land to be conquered."

The journalist emphasized for the students the importance of an education that goes back to transmitting "an ethical conception of life, with values and rules at the center of everything." A negation of such principles, he contended, "is wild capitalism, which, paradoxically, has its maximum development in communist China."

"We cannot conceive of the person in 'business' terms," he concluded, "and we have to find rules of co-existence that are not founded on materialism. We should redefine our society based on being and not on having."
Posted by Padre Steve at 10:32 PM

i'll be linking your blog to my site... it is always a wonderful experience meeting confreres in the
web.

"The very acts of Mohammed, documented by history, and which the Muslim faithful themselves do not deny, testify to massacres and exterminations perpetrated by the prophet. Therefore, the Quran is incompatible with fundamental human rights and non-negotiable values"

This is exactly true and until we understand the history of Islam, then we will not be able to deal with it, although our intentions are pure...

"Therefore, the Quran is incompatible with fundamental human rights and non-negotiable values."

Muslims essentially acknowledged this by creating and subscribing to the "Islamic Declaration" of Human Rights, separate and specifically superseding the "Universal Declaration" of the U.N.

"The very acts of Mohammed, documented by history, and which the Muslim faithful themselves do not deny, testify to massacres and exterminations perpetrated by the prophet."

Massacres which too many in Islam currently see as the model for their activities today. Spare some sympathy for those Muslims who realize that they either must serve G-d by doing this, or accept a crushing burden of guilt and shame for all the deaths caused by the actions of their ancestors, from Mohammed to the present day.